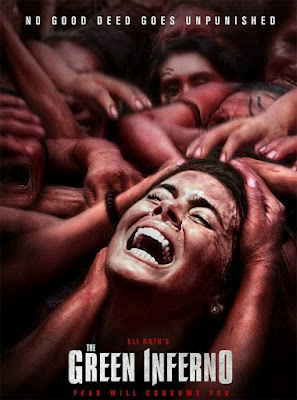 So finally I have seen this,made in 2013, but with a limited cinema release late last year,why has it taken so long to come out? Is it any good? Well the answer is no. My only thought for the delay,is well,
it is not very good,and I'm thinking,this must've been a strong contender to be shelved by said film company.

With some terrible acting,actors who are looking like they are almost laughing between scenes,fart,shit,and dysentery,is not needed in this film. And the torture scene of the fat guy,is only put in to offend,and to gross out people. The same scene could've been done better,by hinting of the violence,sounds effects,and watching the faces of the people captured,looking on would be far more scary.

Eli Roth though does not do subtle, directing like an excitable child,wanting to show more blood on screen,a man who has been let loose in the Gore makeup box,and is determined to use every prosthetic,and corn syrup by the gallons.
Don't people know,that sometimes seeing less is more,some of the best horror films made,has been more about tension,less about Gore,this has none,a film that runs out of ideas,then "oh I know,we will tear somebody apart again" mentality. The only positive of this film,is the scenery is gorgeous, The Peruvian Rain Forest is stunning,and cinematography is the only plus point of this movie.

All in all a pointless film,with thrown in over the top Gore,and torture,just for the sake of it. This could have been a decent,survivor Movie,in a different directors hand,save your money,and buy or stream Apocalypto by Mel Gibson instead,a decent survivor Movie, yes with violence,but more tension per square inch,than this excuse for a film.
A disappointing 1/5 ⭐️ 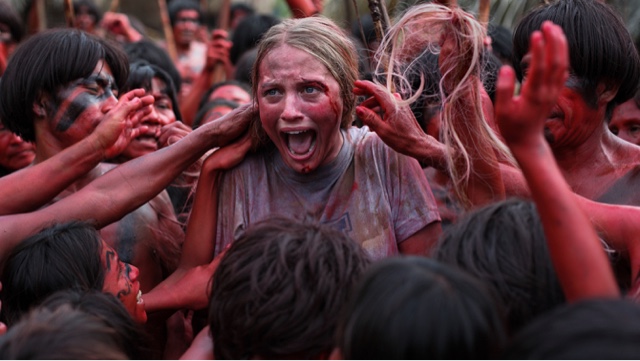