I watched this today,and although it is awful,it is still incredibly watchable,making his acting debut is,internet, and YouTube star Kian Lawley. Yes I had never heard of him either,but infairness it is not a bad debut,as I had no idea who he was. He does a decent job in this strange film about choices,who lives,who dies,who will be sacrificed to the appease the Demon.
Anyway think of every horror film made in previous years,especially those on possession,and this film ticks all the cliche boxes,a young girl,the Niece of Kian's character Cameron,has her soul taken by some Demon,a child stealer,and her soul will be lost forever. To save her soul,Cameron has seven days to make six sacrifices of the girls same blood line,or her soul will be lost forever.
That is the plotline quite a simple one,and in all fairness is why it works,a dysfunctional family anyway,Cameron is living in a house with his Mum,Uncle,Grandparents,with his Grandpa catatonic with latter stages of Dementia,with his other sister banned from the house,because of her Drug addiction,with Cameron's mother being soul custodian of her young daughter,who Cameron is desperately trying to save
With some sacrifices being quite easy choices,others having to be carefully thought of,we have the usual ghostly figures of family members haunting Cameron,with a ghostly Nun helping him on the way,this film is far from perfect,but in reality is a poor  film,that is really watchable,a film that is so bad it is actually good. If you have 80 minutes to spare,it really isn't the worst film to watch,and believe me I have seen a lot in the last year.
A film made for the teenagers,to admire the internet sensation Kian Lawley,with his acting debut,but you know in a poor film he ain't that bad,and is certainly not the worst thing in this film.
2/5⭐️⭐️ 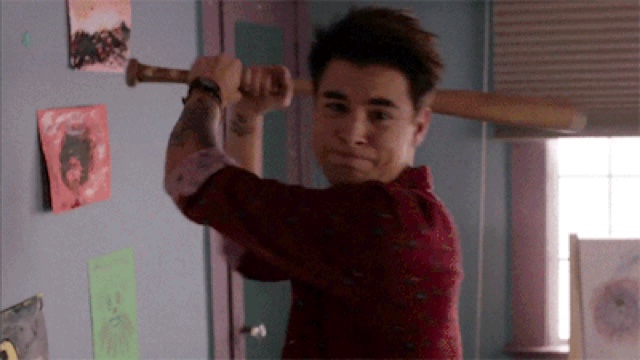