I had such great expectations from the Trailer of this new series,produced from Jason Blum (Blumhouse) and co produced by Eli Roth,with the opening episode directed by Eli Roth himself.
Staring model and former pin up Mena Suvari,famous for the American Pie movies, American Beauty,not new to TV either staring in Chicago Hope, Six Feet Under,American Horror Story, and recently Chicago Fire.

Mena plays a paranormal investigator Maria Abascal,who has a hidden personality,a demon inside her called Abigail, who takes over to send other demons back to hell.The problem is everytime Abigail comes out she gets stronger and stronger,with a will to take over Maria altogether.

Set in South Carolina,the most religious part of America,with more Churches per square metre than any other State,that is hinted in the opening segment,the reason for so many churches,is to fight the evil that resides in that state.

It should have been an interesting idea,a female John Constantine,in sorts,who is herself possessed by a Demon,from a Devil Worshipping cult,she once belonged to,a demon that she can control,and uses it for good to send back other demons back to hell.
Being a one woman exorcist,that is so strong,she will actually eat the essence of any other demon,sounds promising,the problem is the whole show looks cheap,with scary,but cheap looking demon effects,compared to other shows,the production values look shockingly cheap.
With I'm sorry to say Mena Suvari ,who is only 36, but actually looking older than that, and hasn't aged well. She is still not a great actress either, and has never been really.

With only an eight episode run,with an exclusive episode,number nine,only available on Itunes,with surprisingly a second season already picked up,which is incredible, considering how many good series are cancelled after one season, such as Firefly for example.
Even with great horror directors directing single episodes, this is really A terrible series, so my advice avoid, it seems everything Eli Roth touches these days turn to shit, maybe he should stick to acting
A very  crappy series 1/5☆ 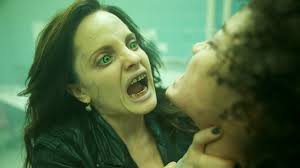