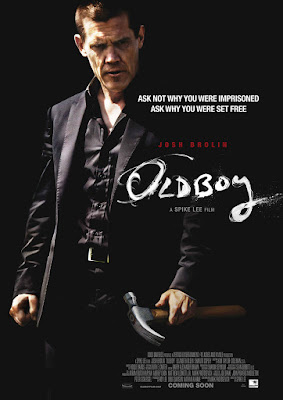 Old boy 2013, another film that needn't have been remade,directed by Spike Lee,who in my opinion last decent film was Summer Of Sam. Staring the usually reliable Josh Brolin,the story of a man imprisoned for many years for no crime committed,in an unknown location,with access to food,toilet,and a TV.

A man who finds out during his time in captivity,that his wife has moved on,his daughter's whereabouts are also unknown,an adult herself now. During his time he watches all the news events happen 9\11,changes in Presidential Candidates,he also becomes incredible fit,with multiple sit ups,press ups,learning a martial art.

Then he is released back into the world,from a suitcase,angry his life,and years have been taken away from him,with a determination to find answers to who had him contained and why?

Although this has a lot of references to the original film,it is not a shot for shot remake,which I suppose stoped it from being totally awful,with some very violent scenes of torture,using hammers and craft knives. The over the top fight scene with a hammer and multiple assailants is still in.

This film is incredibly well acted, with a fantastic and completely memorable performance from Sharlto Copley,with brilliant support from Elisabeth Olsen,it still doesn't stop it from being a film that is too familiar to the original,as a stand alone film it would have been a decent film,but compared to the original in 2003,it just doesn't cut the mustard I'm afraid,and you will be yearning for the original.
Although it is not completely terrible,it genuinely has its moments, in places,but unfortunately I still preferred the original.
2/5☆☆ 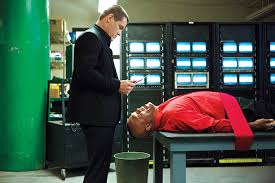