Would You Rather. (2012) Film Review. Directed by David Guy Levy. Distributed by IFC films. 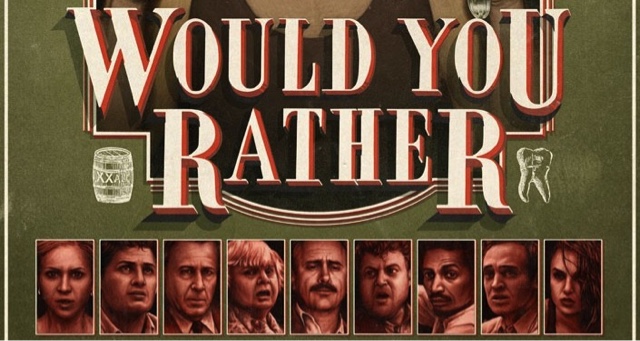 I will admit I have seen some sick and degrading films in my time but this one is top of the list. Based on the Would You Rather game,giving two choices,but these choices being of the most vile and cruel,I have seen in some time. Oops I have almost jumped far to of myself let me explain the plot.
We have a Family who gives out scholarships The Lambret Foundation, money  to needy people,a charitable organisation in a way,but with a difference,to earn your Money,you have to take part in a parlour game called Would You Rather,only the most desperate,will win the money at the end of the night. So we have 8 strangers all desperate for a break in life, invited to dinner at this house. We have the gambler,who is in financial difficulties,a recovering alcoholic,an ex service personnel,and a woman needing money for her brothers medical bills,and to hopefully find a bone marrow donor,to her brother suffering with leukaemia.
With dares first to the alcoholic being offered $50,000 to down a decanter of finest Sctotish whiskey,even though he has been sober for 16 years, to the woman who doesn't eat meat,being paid $10,000 to eat the rare Beef on her plate.
The thing is at this point Lambrick gives everyone the opportunity to leave at this point,with no money of cause,to which all stay,to play his life or death game of Would You Rather.
This is where this film is so sick and twisted,not so much as the violence involved,but to the usual rich affluent in society,playing sick games with their Wealth,to people with nothing,but will do anything to get money. A film that has been done in 13 Sins and Cheap Thrills,with this film being the most horrible and totally degrading.
With choices of who will be electrocuted,yourself or the person your sitting next to,to stabbing someone with an ice pick,or to thrash them with a skin peeling birch wood. With the final dares,or even choices even more sicker,to being drowned,or having to do something to despicable to yourself,such as pulling teeth,cutting eyes,holding a firecracker in a closed hand.
Starring Brittany Snow,John Heard,Rob Wells, Robin Taylor, June Squibb, Eddie Steeples to name a few and the most fowlest villain onscreen in a long time, Jeffery Combs as Shepard Lambrick,a disgusting excuse for a human being,who takes great pleasure in seeing poorer people in pain. Who actually believes he is doing them a favour,but in doing so they have to prove how much they want his help,is the most disturbing, I have seen in any film recently.
The only downside of this film is I felt I had no real person to route for,as all the characters playing the games,are not particularly likeable,or even have any character or personality,not like in Cheap Thrills or even 13 Sins as you really get to like these characters,the only standout person with any personality or menace is Jeffery Combs. I do not know if that was deliberate,or wether the other actors just didn't do their jobs and standout. Still a watchable film,but is also very disturbing.
3/5⭐️⭐️⭐️ 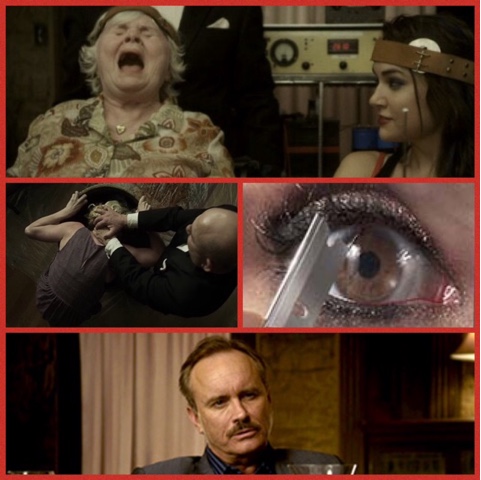