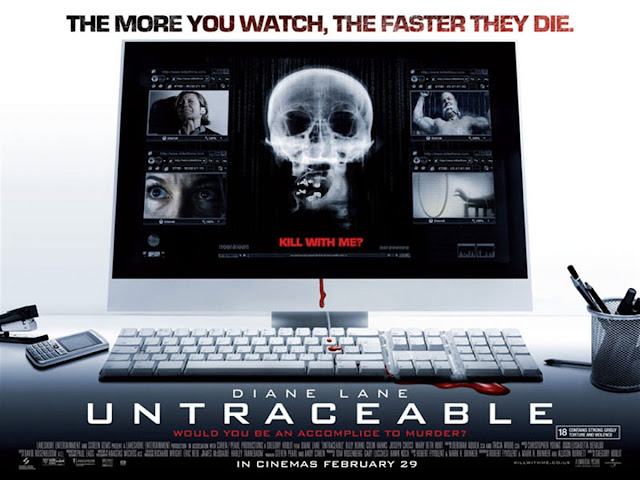 Probably because I'm a little twisted,but I did like this movie from 2008,starring Diane Lane and Colin Hanks. A story about a sick serial killer,who uses the internet, to show off his sick torture of victims,using a YouTube style viewing system,the more views,the quicker the victim dies. The film explores the whole idea of the internet,and the dark side to it,with thousands,millions watching videos in the safety of their own homes. Sometimes vile videos,such as beheadings and torture,and violent deaths. This film believe it all not is actually well before its time,as social media,and especially YouTube was still very much in its infancy stage.

Why is it called Untraceable, well the killer is obviously a computer nut,who knows his or her way round computer code. Bouncing the IP addresses of multiple servers,to become untraceable. With the recent use of what was to be known as torture porn,arriving on the scene after Saw,and Hostel came into the horror scene,with many copying the format,some working,some failing miserably.

With some inventive kills,with the Colin Hanks scene the most disturbing,being placed waist deep in water,to have gallons of acid pumped in,is truly painful to watch,and easily the best scene in this film. With massive lamps that produce heat,to burn someone to death,is equally as disturbing. From 2005—2010 we had a lot of these films,but this one is one of the best of a bad bunch.

With Diane Lane still looking beautiful,and is really good in this,to Colin Hanks, who I only really discovered him on this film. We have a inventive film,that I'm surprised hasn't been copied to death,pardon the pun,but a film that jumped on the idea of social media,long before it became cool,and the norm. A decent Horror film.
4/5☆☆☆☆