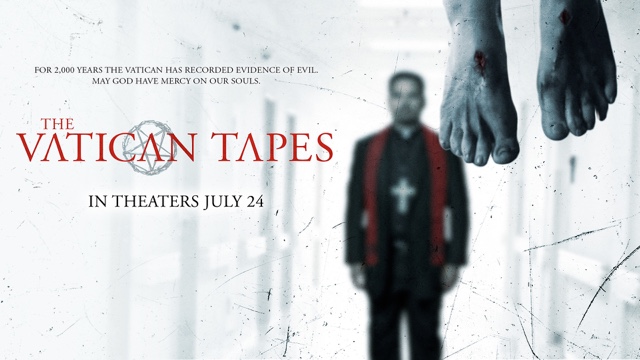 To be honest the Horror world has been flooded,in recent years,with Possession,and Exorcism movies,from The Last Exorcism 1&2, Devil Inside,Possession Of Michael King,The Taking Of Deborah Logan,Evil Dead 2013 to name a few, and yes there are more to mention too,but I will take up the whole of this page on my blog. Here we have the latest offering,part found footage,part normally filmed. Although the Vatican will always deny,exorcism,it is pretty obvious,they certainly know about,it and practice it,with records dating back 2,000 years.
A story of a young woman Angela played wonderfully by Olivia Dudley,who somehow on a surprise birthday party,cuts her hand badly,using a knife,which needs hospital attention,a few days later with an encounter with a Raven,smashing through a bus window,that bites her on her infected finger,Angela's behaviour,changes dramatically,so much so needing further medical attention.
We then have Angela returning home from the hospital,to only grab the steering wheel of the vehicle she is traveling in to crash,causing her to slip into a coma for 40 days. When her Dad and boyfriend have to make the decision to turn off her life support,instead of dying she is resurrected,her Father a complete Christian believing it to be a miracle,unfortunately,with the resurrection comes,the birth of the Anti Christ.
It turns out the devil can choose anybody from the moment of birth,till death,and Angela was chosen,because of similar references to the bible,her mother was a call girl,she spent 40 days and nights in a coma,similar to Christ,spending time in the wilderness. And this has always been predicted by the Church,that the Anti Christ,will return to Earth,bringing miracles,creating false prophets,and gaining followers.
As I said this is no ordinary Possession movie,yes it contains an Exorcism,but this is the rare time,that Evil actually wins,and that isn't a plot spoiler,as it is referenced in the Trailer. With the Catholic Church trying everything to prevent the birth of the Anti Christ. With a great performance from Michael Pena as Father Lozano,witnessing throughout the change in Angela,knowing in the end he can do very little.
This movie is not particularly scary,do not believe the covers,or posters,but then again,not a lot does scare me anymore. The acting is the main plus point,as Olivia Dudley puts in a brilliant performance,very similar to Jennifer Carpenter in The Exorcism Of Emily Rose,and it is hard to tell which actress put in a better performance,in a challenging role of possession. I did like this film,it is different to other films about possession. It certainly does not deserve its low ratings on certain online movie review sites. Yes I may have seen better,but with an extremely clever ending,and really great acting from all involved,we have a very creepy film,not scary,but still very much worthy of a watch.
3/5⭐️⭐️⭐️