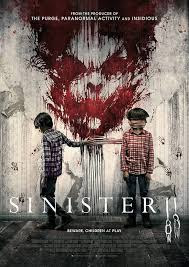 After the disappointing Conjuring,Annabelle,Insidious 1 and 2,Blum House productions have actually finally produced a franchise that is good, Sinister is a film that really creeps you to the bone.

The first film got to me,and was with me for days afterwards,well this film is equally as disturbing. With a different family this time,moving into a farmhouse,a single Mum with two sons,both recovering from an abusive father. The fact though both Brothers can see, the Demon,and the ghosts of the previous children,but only one is choose by Mr Boogie to eventually do the awful deed. What you see as a disturbing dream in the opening credits.

With the Deputy from the first movie,determined to stop this trail of murder,from burning down any property belonging to a family that has been sacrificed for this evil being.

The only thing that didn't get to me so much this time was the disturbing super 8 mm  films this time,yes they are equally horrible in nature, but do not quite have the same  shock me effect as the previous movie. They are all super graphic in nature though.
The electrocution scene of a family,submerged in water,with a loose electrical live wire is the most disturbing,being called Kitchen Modification. I feel seeing the previous movie in a way desensitized the same effect second time round.

Trust me though this film is creepy,it will chill your bones,and seriously make you feel uncomfortable watching this. The reason why,using the innocence of children is absolutely terrifying,that is why this film works,and truly gets under your skin, disappointed a little,as I thought you would see more of the Demon,but he still scares the shit out of you when you do see him.
A frightening sequel that is as good as the original film,a film that both times has got to me.
4/5☆☆☆☆ 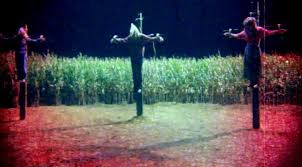