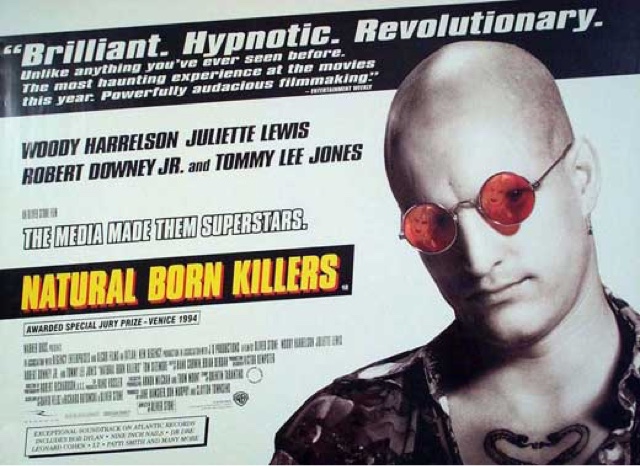 A film I saw three times at the cinema,this is a film no matter how many times you watch it,you find something you've missed previously. One of Oliver Stones better films in the nineties,with a script and screenplay written by Quentin Tarratino. With apart from Zombieland  this being easily Woody Harrelson's best film,even the normally annoying Juilette Lewis was decent in this.
This is a film where we are introduced to Micky and Mallory Knox,two destined souls meant for each other,both with a destructive hatred of the world we live in. The tag line was they know the difference between right and wrong,but just do not care. With the emerging 24/7 news coverage,this film is the perfect film,to exploit the press,and the media organisations. With the press trying to damm them to hell,but actually making them more media superstars.
The strange thing about this film,is the media makes them out to be monsters,but the actual,reality is the horrible people,are the people who are in power,such as the detective,who sexually assaults Mallory,to the Prison warden,breaking all rules on human rights. To Mallory's abusive father,and her despicable Mother,who sits still,and does nothing,whilst he is sexually abusing his daughter.
Yes this film is violent,but compared to most modern films now,it is quite lighthearted,the thing that struck  me how good this film is,is the cinematography,the striking visuals,that actually attack your senses. Using just about every camera trick in the world,but actually pulling it off marvellously. With cartoon imagery, to using scenes as if they are straight out of some sitcom comedy,is genius.
This is without doubt Oliver Stones greatest film,alongside of cause Platoon,with the performance of a generation from Woody Harrelson, who proved he was a great actor,coming from the sitcom "Cheers" playing a dim witted barman,to playing a psycho,also with a heart,with an on form Robert Downey Jr,and Juliette Lewis, we have a perfect cocktail of perfect performances,with a film that will literally blow you away. A modern masterpiece of filmmaking.
5/5⭐️⭐️⭐️⭐️⭐️