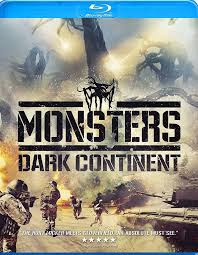 The sequel to the 2010 film,yes and proud that it is another British made film,with most of the cast being British, even though they are portraying Army Soldiers from Detroit. On the first proper tour of duty,to some middle eastern country,where these monsters have now respawned.

With an on going battle again,in an almost illegal war once more. Against these creatures, the thing is the locals are not happy with the constant bombing campaigns. With many innocents being collateral damage.
with insurgents fighting an Anti American stance. With I.E.D's and guerilla fighting.

Once more the Monsters take second fiddle to this film. With the modern warfare being the main story here. And it is relentless. It shows the true nature of modern War campaigns of late. The thing that got to me was the true friendship of these soldiers,who are more like brothers. Who will put each others lives on the line,to protect each other. And to see hardened men cry,when a brother is downed,and killed in action,is absolutely heartbreaking. Something that no other profession will ever come close to,and something us civilians will never understand.

With scenes of torture,and capture from the insurgents,and scenes of I.E.D explosions,and the devastation they cause is captivating and terrifying too.
If you wanted a movie,to see more Monster action,once again you will be disappointed,but you will see one of the most honest films about war. Which is relentless,violent,and most truthful movie about warfare,that I have ever seen.
4/5☆☆☆☆ 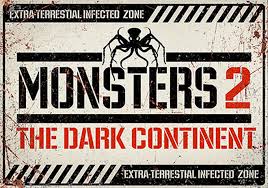 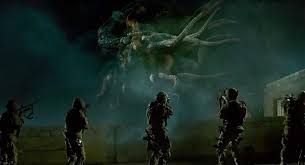