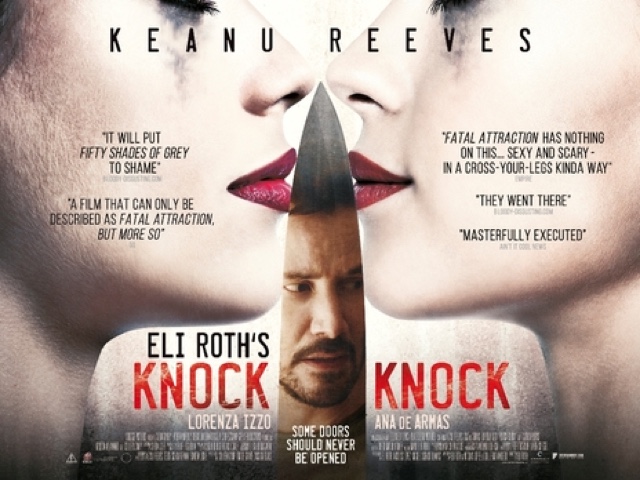 I so wanted to like this film,I watched the trailer,it had Keanu in,it was directed by Eli Roth,what could possibly go wrong. Well as it turns out everything,with probably the worst ever performance from Keanu Reeves,we know he is not the finest actors ever,but he is just dreadful in this,but I do not think it is all his fault,as the script,and dialogue is terrible, even the two protagonists who are both gorgeous by the way.just come across as giggling teenagers,with no menace at all. To the fact two young girls,probably weighing less than 50 kilos each can overpower a man who is over six feet tall,and is quite toned,is just unbelievable.

The other unbelievable part of the film is how these girls,can seduce a happily married family man,which the whole opening twenty minuets,shows how dedicated he is to his family,and they can destroy everything and seduce him within 45 minutes. It just shows that all men,with a bit of skirt put in front of them will give in,and ruin everything for sex.

Turns our these girls have daddy issues,one of them was at least hinted was abused,so they make a habit of stalking potential victims, first knock on the door whilst the man is alone,suduce them first,then torment them,and Tourture them. That unfortunately is the whole story in a nutshell,this is where we have to put up with a hour of them laughing and giggling manically. For two girls who are susposed to be menacing,it just does not work,with I'm sorry to say also bad acting from both,especially Lorenza Izzo who is actually Eli Roth's real life wife. The whole premise is just so unbelievable.

I cannot understand why Keanu did this film,because apart from John Wick, 47 Ronin was a complete mess, and Man Of Ti Chi wasn't much better,this is the same guy who starred in Speed,Matrix, Constantine,Point Break, was excellent in the original The Gift,by Sam Rami,even half decent In The Watcher.

If you want skimpy clothing,a little nudity,but some of the worst acting imaginable please give this a go,honestly I was cringing how bad that it really is,a film that I will certainly be exchanging,or even giving away,as I do not want this in my collection. In all fairness I was looking forward to the Green Inferno, by Roth in February,well after this mess,you know I may not bother.
A very poor 1/5⭐️