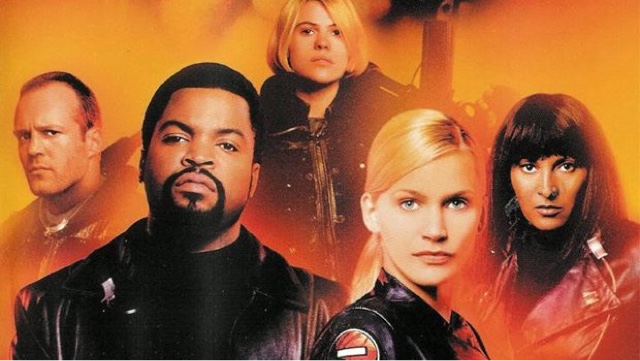 I came across this last night,and decided to give it another view,and you know it is still terrible.
Cannot believe it is from the same genius who gave us Halloween,The Thing,Assault On Precinct 13,They Live,and In The Mouth Of Madness. Yes I get John Carpenter is the master of low budget films,but this I'm sorry is definitely his worst effort,and yes Escape From Los Angeles was bad.
With just dreadful acting from all involved, I'm not sure whether it is deliberate,or it is part of the low budget, almost a  Grindhouse feel to the film,it actually looks like it was filmed in the seventies,but with modern actors in it,with terrible set design,effects,looking like a student made film with a college budget.
We have Jason Stathan with hair, Pam Grier,the queen of black exploitation movies,why she is in this I never know,probably needed a little pocket money. With Natasha Henstridge,the ex model,who only other famous role is in Species as Sil, and Ice Cube,taking a break from the  Are we there Yet films.
I know I sound patronising,but I really do not like this film, I traded it in almost imediately,in early 2000's, and we had to wait till 2006 till John Carpenter was truly back, With Cigerette Burns, from the Masters Of Horror TV series,following with The Ward 2010.
If you are a John Carpenter completist,feel free to have this in your collection,but I just never liked this movie, and that honestly pains me to say that, Vampires was so much better,a few years before, the dreadful acting,terrible set design,cheap effects, I can normally ignore and put to one side,but Ghosts Of Mars is really an exception of badness.
1/5⭐️