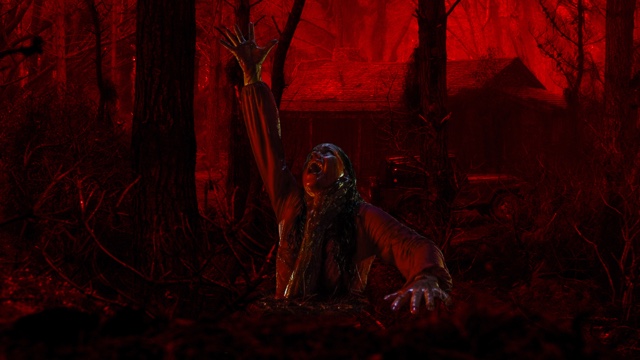 I will say this that I will find some good in any film I watch,no matter how corny,badly acted it is,out of every negative there  is always a positive. I take the same approach to any remake/reboot,or what ever you call them these days. So I wasn't expecting much from the Evil Dead remake,especially without Sir Bruce Campbell. My neighbour had seen it, before  me at the cinema,and she said it was the most disgusting,depraved film she had ever seen,and when I watched it,in all fairness I had to agree in some parts.
At least the original Evil Dead,and I mean the very first one,had some humour in it,obviously it went balls out comedy in Dead By Dawn,and Army Of Darkness, this had none of that,a film made to deliberately upset all your senses.
With the main hero this time female,who somehow turns to a deadite,but still manages to become normal in the end,for one of the bloodiest of battles seen on celluloid.

With scenes to deliberately upset,or at least make you completely cringe, the tongue cutting scene,and the arm cutting scene,with an electric knife. At least with Dead by Dawn,or even the original Evil Dead had humour,to counter balance all  the bloodshed.
I wasn't expecting a "groovy" I know this was a remake,but a little humour in would have made this film watchable. A film so serious,that we had to wait for a parody of it in Scary Movie 5,which summed up this movie,better in a 5 minute comedy segment,and actually was better done,than the real violence in this movie.
In fairness it was well filmed,and once again well acted,especially all plaudits going to Jane Levy, "Mia"the Drug addict,on detox early on,making her an easy demonic takeover. With her literally being reborn,to kick the crap out of her Deadite self,using at least a chainsaw,in the final moments.
As I said if you love gore you will love this,if you are a twenty something,you will probably think this is the best film ever. Me on the other hand can remember the 80's video cassette,before being banned,and the that will only be my Evil Dead. Not this poor excuse of a bloodbath,to do one thing,and one thing only and make it sensational,and offensive.
That is why I can only give this 2/5⭐️⭐️