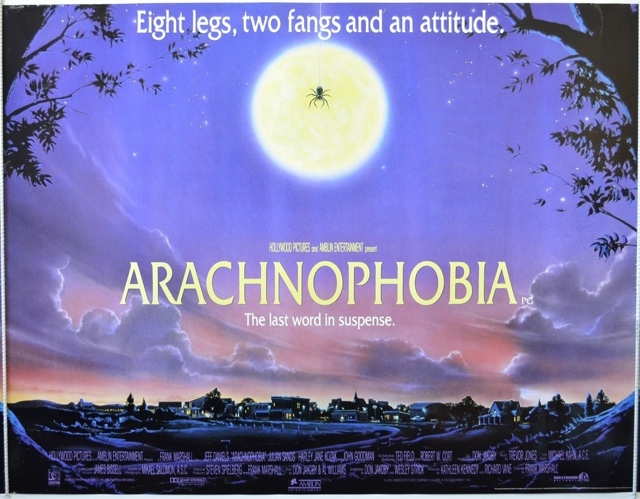 This probably,apart from Jaws being one of the scariest PG movies to be made,a family movie for all too be terrified by. With this being Steven Spielberg,and Kathleen Kennedy's long time producing partner Frank Marshall's directing debut.
With it wanting to be reminiscing of Alfred Hitchcock's The Birds,and what a debut film,a film about that one thing we do not like,the tiny creature that skulks,and scurry's along in corners of our house,that one primeval thing we are all naturally scared of by definition. To have a common house spider,that somehow mates with a poisonous South American Jungle Spider,accidentally imported into the country.

With the small town setting is perfect,when these Spiders hatch,and causing death and mayhem,and panic,with an introduction to one of the worst pest controllers to grace our screens,played wonderfully by John Goodman,who only accidentally manages to be useful. With other key players,such as Jeff Daniels,and Julian Sands as an arachnid expert.

By actually using hundreds of these evil Eight legged creatures, on screen,that was very cleverly controlled on set by temperature control,with no CGI on display here,is what makes this movie more real, like the very clever scene in Creepshow with thousands of cockroaches,terrorising a man scared by insects,we have a similar scene of Hundreds of these horrible eight legged creatures,scurry from a bathroom sink,is once again just horrible.

With a film that is so well acted,and well made,a film that will scare the living daylights out of you by using little creatures,we find in our homes daily,is what makes this movie more terrifying. A fantastic debut from Frank Marshall,with others trying afterwards such as Eight Legged Freaks,and Big Ass Spider,this film is still the best about those little scurrying creatures.
4/5⭐️⭐️⭐️⭐️