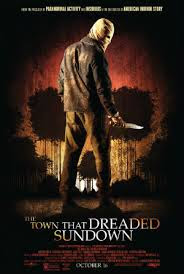 I will admit I have never seen the 1970's version of this film. But with great reviews,and online chat,and recommendations, I decided to watch this. And in all honesty I was underwhelmed by the whole experience. Almost giving up at the 33 minute mark. As I was just sick of the low level,and incoherent babbling of the script,and actors involved.

I turned it off and returned to it today,and yes the film did get better,but only by very little actually,with a twist ending,that really adds nothing to the film. The reason I carried on watching it was became of Addison Timlin,who was ace as Stormy in Odd Thomas,and she is equally as lovely,and memorizing in this.

This film is neither a sequel,or a remake,more of a copycat version of the original film,using the same locations,and same fatality order as the previous film. With the local police having to watch the original film for clues. It has its clever moments, I will give the film credit there,with the kills onscreen happening in reality,then cut back to the original movie,of the similar kills,is clever. To the retro setting,although filmed in 2013,but looking like it is filmed in 1973,with retro seventies fashions. Like the previous film It Follows,with a definite retro feel to it makes this film unique.

The film still in the end turns into a by numbers run of the mill slasher film,with the Killer nicknamed the Phantom,returning to kill once more like he did 67 years previous,as said in the opening credits,the original film was a retelling of actual events happening in 1946. So we have an original  film based on real events,with the copycat killings of that film, in this film,so a film within a film. That was done so much better in the Scream franchise,and most recently Final Girls. With fancy camera work,and clever cinematography,does not save this film from being just a normal Slasher/ Horror film. Shame as the trailer and online marketing had this film looking really good,when after being seen,is just an average film,with above average production values.
2/5☆☆ 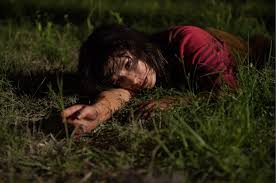