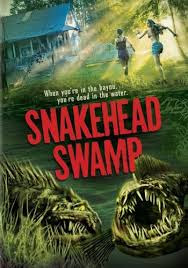 Another SyFy exclusive,a film I actually thought might be okay. Yes we have had Sharknado trilogy,Mega Python, Two Headed Shark Attack,and IceTwisters. Well SnakeHead Swamp is not for me.

I can take cheesy CGI effects, I can forgive below par acting,but I cannot forgive a script,that is completely boring. With no new scares,or any decent violence, Heck Sharknado is literary genius compared to this.

A story about genetically altered Snake Fish,to grow,and learn quicker than any other species, with an insatiable appetite to kill,accidentally released into the Swamps.to release havoc on the unsuspecting Swamp folk.

With a lovelorn story of a man getting over his ex who has recently remarried, to his parents,his Mother who is Ranger round these parts,and His dad a Swamp Expert, who has recently divorced,with a sub plot about voodoo,and curses we have this mess of a film. I can watch any crap film,and usually find some good in most films, well in this I just couldn't,and I loved Sharknado,and that is terrible,but still completely watchable, this I couldn't like any of the  characters,the script is, well boring,with too much emphasis on Love,and rekindling,just give me more violence,and Snakefish eating folk,in a spectacularly violent bloody way, and I'll be happy.
1/5☆ 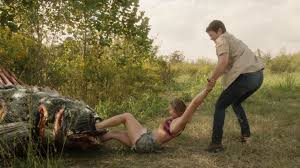