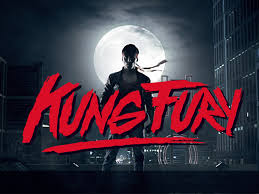 This short film is the most fun you will have in 30 mins,and more bangs for your bucks than any other movie 10 times the budget,and three times the running time.

We have Kung Fu, Nazi's,Dinosaurs,Half Naked big breasted Viking women,with heavy artillery, and Adolf Hitler,who can travel in time,to cause his Kung Fu mayhem in modern1985.

This is a Swedish film funded by a Kickstarter campaign,with a budget of $200,000 to raise,they actually got over $600,000,to fund this 31 minute film. Written ,produced,Directed,and starring as Kung Fury David Sandberg. With a sly wink to 80's culture,with video cassettes,Amiga,and ZX Spectrum computers,with massive Ghetto Blasters,people Wil kill for literally.
with over the top violence,and splashings of blood and gore,we have a really great retro film,made to look like it was made in that time period also.

I suggest watching this first followed by Turbo Kid and you got  the perfect retro night in ,to remember the decade,most are trying to forget,but to some who want to bring back what a great,corny decade it was.

This is really a great watch,so corny it is brilliant to the Gruff hero Kung Fury, to Thor the Norse God,the Kickass Big Boobed Viking  women,and the talking T Rex,and the best Adolf Hitler,as Kung Fuhrer,who wants to take over the world with Nazi fighting Arcade Machines,so he can be the only Kung Fu master of the world.
Filmed entirely on green screen,with the backgrounds,and effects put in later,we have a fantastic debut from Director David Sandberg. We have more of a film in 30 minutes than we see in most films three times the running length
5/5☆☆☆☆☆ Must see. 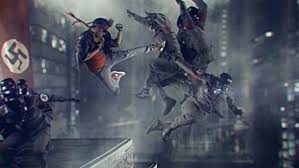