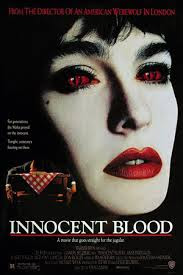 Another forgotten jem,once again coming out in 1993, I can remember that summer well,going out with a Girl,and taking her to see this, Fire in the Sky, Hard Target,and Falling Down. A great summer of films,hence to say she hated them,and prefers comedy,it only lasted 3 months but I enjoyed all those films.

With this vampire movie being directed by John Landis, of American Werewolf Fame,Animal House, Blues Brothers,and Coming to America, this film was even called in some countries, A French Vampire in America. I liked the  English  tagline "she has a taste for Italian" as she only eats and kills bad people,namely Italian Mobsters. With Anne Parilaud debut Hollywood film,after her great La Femme Nikita role.

Starring Robert Loggia, Anthony LaPaglia Chaz Palminteri, also starring Sam Raimi,and Dario Argento as cameo roles ,a comedic Horror film,that has it's moments of violence,and nakedness with the gorgeous Anne Parilaud as the sexy vampire,who uses her sex appeal to get men into bed,to drain their blood.
I have once again never seen this film on DVD or bluray in the UK,only owning this on VHS cassette. From what I remember it was a great vampire movie. With it being the most heavily censored in the US,for the sex scenes and violence, with the European market getting the best deal with it being over 30 seconds longer. Please I would love to see this again on DVD or bluray, a great Vampire movie,not to be taken seriously,but still enough flesh and crimson to keep most gore hounds happy.
3/5☆☆☆ 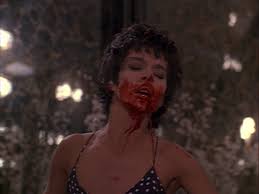