I have just finished watching this mini series,and what can I say "WOW". I had already reviewed the Pilot last week,and although slow moving,I said it had promise,with an underlying creepiness,and unnerving feel, of what might happen.
I was for once not disappointed, I will review,and run through every six short episodes. 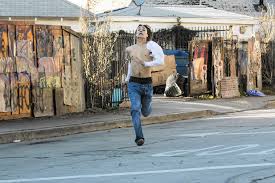 Episode 1 Pilot.
This time the series is set in Los Angeles, not in Georgia,we have no Rick Crimes,or Daryl,we do have a very dysfunctional family for once. Two high school teachers living together the Clark's and the Manawa's from broken families,with teenage children the man's kid hates him for leaving his Mum,and the woman has two children herself with a teenage daughter Alicia,and an older son Nick,who has a heroin problem. And  this isn't always the best time to go cold turkey,during a Zombie outbreak,and apocalypse.
When the teenage lad wakes up in his usual drug den,to find a woman eating another's mans face,even in his drug induced state,he knows something isn't right,panicking,running into the road to be hit by a car,his family does not believe his story,and believe it was just a bad drug trip he was on.
It is then we have a little build up to strange things happening in Los Angeles,nothing straight away,but a very slow burn,leading to something no one can explain near the end of this episode,with a unnerving feel to it,with a sense of foreboding,you know you are in for a great series.
3/5⭐️⭐️⭐️ 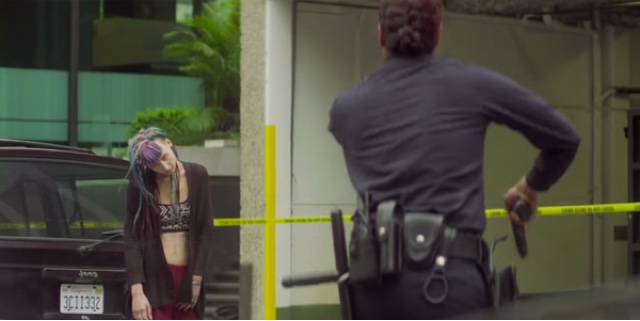 Episode 2 "So close, yet so far"
We now have the Clark family Back together, Travis Manawa has gone to locate his teenage son with his ex wife,who is caught in riots,due to a police officer shooting the above woman. Something is definitely not right with the world. During the riots Travis takes refuge with a Spanish family the Salazar family,refugees from El Salvaldor,where the father becomes a pivotal part of this series later on.
Madison Clark returns to her school,in the hope of raiding the medicine cupboards,for any drug that could ween her son off heroin,whilst bumping into another student,who has heard that the viral infection is spreading,and news is finally reaching the social networks. When the principle of the school attacks them both,and Madison smashes his head in with a fire extinguisher.
This is when we now now that this outbreak is taking over.
3/5⭐️⭐️⭐️ 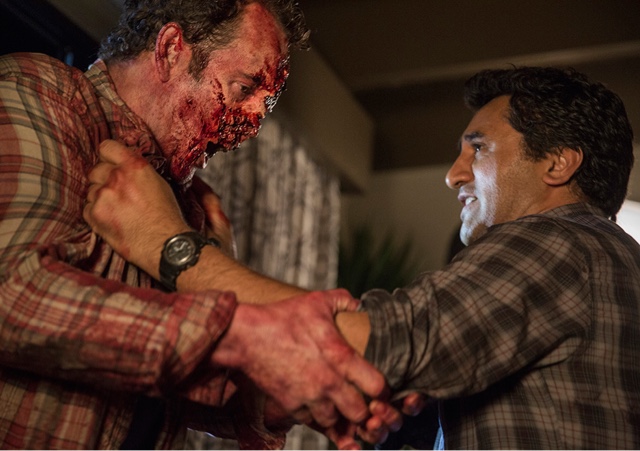 Episode 3 "The Dog"
With this being probably the best episode of this sixth parter. Madison and Travis are reunited with each other,with his ex wife and child with him,also the Salazar family,has taken refuge with them,after leaving the city,and there business,after the riots. With the City loosing all power,and going into complete darkness,Madison knows  that a neighbor has a shotgun,and she and her family break in to retrieve the shotgun,with the neighbour Susan already turned,and not being able to open,or squeeze through the small gap in her fence. Why it is called a Dog,they rescue a German Shepard,wining at their door,who they loose in,to eventually be eaten by the above other neighbor,when they leave a door open,to go next door,with two shotgun blasts to the head finally takes him down. Why is this the best episode,it has everything,the first real zombie attacks,the family realise they are no longer safe in the place of normal safety their home. And they pack provisions to escape to the desert and hopefully ride everything out. This episode has it all suspence,some great violence,some great acting. This is the episode that I realised this series could be something decent.
5/5⭐️⭐️⭐️⭐️⭐️