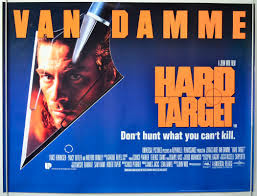 One of my guilty pleasures,and yes I love this movie,and is without any doubt Jean Claude Van Damme's best movie.
what's not to love it has Mullets, punching snakes in the head, slo-mo fighting scenes, Doves flying, horse chases,and a great motor bike chase.with gunplay galore. Oh and Lance Henriksen as the over the top bad guy.

With this being John Woo's Hollywood debut,and strangely not being recognized as an action genius till two films later in the fantastic Face Off, with producers worried about his English language skills,they employed Sam Raimi as assistant director,in case it all failed,and he would take over.
With Van Damme as Chance Boudreaux a French speaking man in New Orleans,with the whole film being set around the French Quarter,to explain his accent,and The Bayou,with a climatic ending using old Marci Gras floats,and heads

With this being almost a prequel to the Hostel type films,where rich business men pay a fortune to hunt human prey,with an organization led by Henricksen,who has choose New Orleans as the new hunt, choosing homeless men as prey.  Only this time they pick on Chance Boudreaux,who has special forces training,and can kick ass and survive like anyone's buisness. Involving some of the best gun play,fighting skills,and action chases,involving cars,motorcycles,and Horses.

We have easily the best action film. Of 1993, with Sam Raimi explaining John Woo at 70% is still better than most American directors at 100%, with the critics panning Van Damme's wooden performance,but praising Henriksen,even winning a Saturn award for his portrayal as the main Huntsman. A classic I think,a great debut by John Woo,and still my Favorite Van Damme movie. Also for once in the UK we got the uncensored version,with more violence,making it an 18  certificate.
4/5☆☆☆☆ 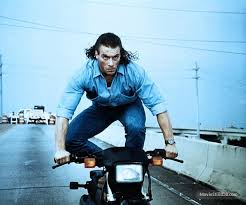 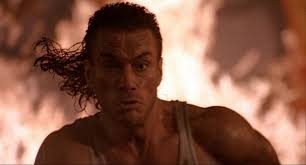