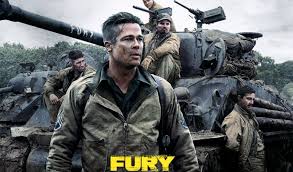 I love war films as much as Horror,and I have owned this since February,but have not brought myself round to seeing this.
Well I kinda figured a Sunday afternoon is a perfect time for a War Film,so I put it on,and you know I wished I hadn't. Being warned by a good friend at work,that it is not the best,and he was right.

Yet it is not the film itself,as it is well filmed and acted,it is I just didn't like any of the characters, apart from the new recruit Norman,a desk Clark being sent out to the front line. From Brad Pitt,as hardened tank captain Wardaddy,to Shia Lebouef, "Boyd Swan".The normally very good,and reliable Michael Pena,"Gordo Garcia",the Walking Dead's Jon Bernthal "Grady Travis". They come across as the most vilest of men,if you can call them that,as war has made them machines,far from men and being human.
As this is a true story I cannot comment on how true their portrayal is,but I wished that Norman would turn on any of them and put a bullet in them.

With this set near the end of the war in 1945,with most German soldiers surrendering,on mass.With a sickening scene of one German soldier surrendering,Wardaddy believes making a man out of young Norman,is to beat him into executing this young German pleading for his life. This is why I didn't like this film,and call me a liberal,call me what you like,there is no need for this type of barbarity,especially in War. In all war films I have watched i have never experienced so much cruelty,and inhuman activity.

That is why I never cared for what happens to these individuals,at the end,with a final stand,from the Nazi soldiers,in an almost suicidal last stand,with a Tiger Panza tank,taking out the three remaining American Tanks. Yes this films shows the normal horrors of war,body parts,human faces splattered across the inside of the tank, innards, plenty of blood, to keep most gore hounds happy. It all helps if you like,or care for anyone in this film,well in this I didn't , and to say these individuals were hero's at the end,makes a sickening ending.
When will Brad Pitt make a decent film,like he did in Seven, Kalifornia,12 Monkeys,so we are talking almost 20 years then.
Not a film I can recommend.
2/5☆☆