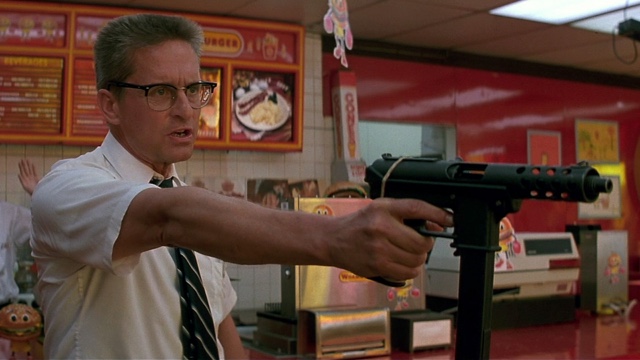 One of my faves of the Nineties,Joel Shumacher's  tale of Urban reality,a tale of a man already on breaking point. Divorced,being made redundant from work,forced to live with his aging Mother,stuck in traffic,on the Hottest day of the year William Foster is about to have a bad day.
Although I do not condone violence in anyway,I do feel for Michael Douglas's Character,a man with so much pent up aggression,regressed for too long,with a fight back from an attempted robbery,in which he fights back,he goes on a rampage through Los Angeles,fighting back at everything that has ever annoyed him. In violent,but darkly funny ways.

Every scene that Michael is in he excels,and the truth is we are all fighting alongside him,and cheering for him,as he fights against every injustice in the world, to the Fast food restaurant who will not sell him the Breakfast Menu,1 minute after it has finished,only offering him the lunch menu,to give him a floppy burger,which looks nothing like the big juicy picture on the Menu.
The local council digging up roads,with cones,for no apparent reason,except they have a budget to spend on roads,and will cause disruption to 1000's of people a day, so he gives them something to fix,by launching a rocket,from a a laucher into the Hole,that causes an explosion,and water, gas, and electronic cables will then need to be fixed.

All the time this rampage is happening we have detective Martin Pendergast, on his retirement day,that might in the end be the final day and  retirement from life itself,as he has to come up against  William Foster. A cop who is unappreciated from his fellow workers,and Chief of Police,recently berieved himself,loosing his daughter,and the grief forcing him to take a desk job. Will these two very bitter and angry men face each other.
This is easily Joel Shumacher's best film of his career,except Lost Boys of cause,and Michael Douglas's best role,playing the anti-hero,with an on form Robert Duvall, as Detective Pendergast,who might actually show his peers he has balls,and can handle this final case.

A very violent,but darkly funny film,about fighting,and standing up for your rights,but doing so in the wrong manner,using violence,and intimidation,that secretly we all wished we had the balls to do. With the best acting from the two male leads involved,makes this bittersweet film a must see. I haven't seen in about 10 years,but I need to revisit it again,as I loved this great film in 1993.
4/5⭐️⭐️⭐️⭐️ 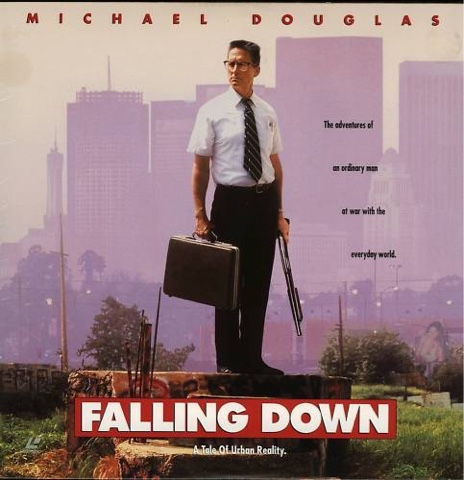