The above poster says it all,and in all fairness it is not a bad film. As thrillers go it is alright,it has some bloody moments, we only wish that more of that gore could be seen on screen.
A film really about corporate greed,and how it can effect normal people. With a posh party on the 50TH Floor of this Wall Street Towerblock,when the CEO of this corporation is about to make a major speech about his retirement from this Company. Even though it has been recently in the News about losing major Investors, Billions of Dollars. The CEO is still about to get a Golden Handshake of $75,000,000.
With nine strangers in the lift, including CEO Henry Barton,first time seen in the building in three years,with his Brat of a Granddaughter,with Martin Gosling, a Mutual Funds Manager,with his fiancée News Reporter Maureen Asana, Don Handley,another Mutual Funds Manager, George Axelrod, the entertainment booked for the after dinner. With Mohammed the lift security guard,and Investor Jane Redding, with heavily pregnant Funds Manager,on maternity leave Celine Fouquet.
With the lift full to capacity,and George the Entertainer being heavily claustrophobic,the Brat of a Granddaughter,presses the stop button on the lift to antagonise George. When the lift will not start,due to the emergency brakes on. They are all stuck In this lift,when Jane announces,she lost Millions of Dollars due to investing,in a company, which Barton Investment recommended. It Led to the suicide of her Husband,and she is very bitter,and has a lovely surprise for Henry Barton,a small explosive device attached to her abdomen,big enough to kill him,and explode in a five feet radius. But being in a lift,would kill all nine,and the timer is ticking,and cannot be stopped.
We have a very tense film,which some has said is far to chatty,and not enough action,or suspence,well I disagree,we have characters who at first you hate,and actually like in the end,we have the Pregnant Woman with more Balls than the rest of the lift put together. We have the usual stereotypes,because Mohammed is a Muslim,he is suspicious,and takes most of the flack from the lift patrons,which is unbelievably rasist,and jingoistic. We have the two Fund Managers who knew about these dodgy investments,In which they were selling to clients. With Henry Barton quite rightly being turned against by the other lift users.
We have dismembered arms,a woman being cut in half with a Pen Knife to try and take off the Bomb,and throw down the lift shaft,we see blood,but none of the gore though. And a bittersweet ending,with one of the only decent characters not making it out alive,which annoyed me,oh the lift does explode though.
All in all a half decent thriller,the rasist element could have been taken out though,a spoilt ending,but I will give no spoilers,a bit of blood,quite a lot of tension, the arm dismembered is a brilliant scene,and some good acting involved,considering it is just nine people in a lift for 80 minutes. As I said not a bad film,not outstanding but an okay watch.
3/5⭐️⭐️⭐️ 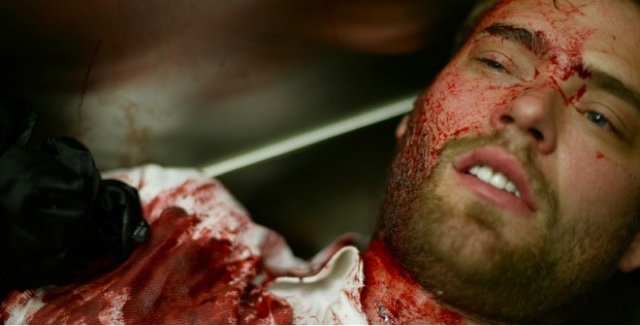