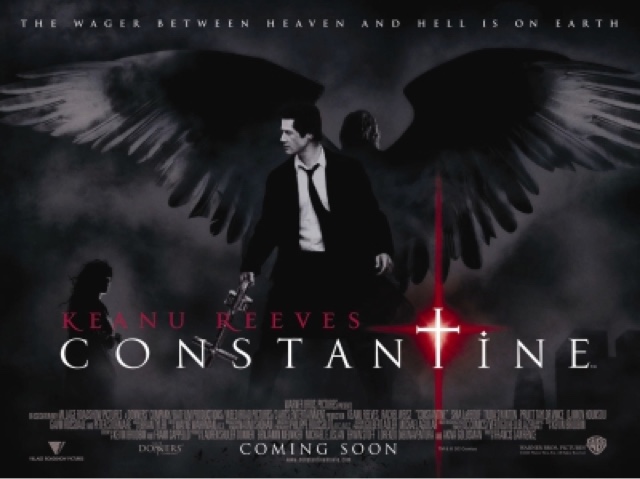 Keane Reeves, you either love him or hate him,and yes we know he is not the greatest thespian, method actor in Hollywood,but my goodness he does know how to choose his film roles. With John Constantine being up there with some of his best characters.
Based on the Graphic novels of the same name,and also recently turned into a US TV show which I have not seen,as I refuse to pay for Amazon Prime,to watch movies,and TV shows.
As a child being able to see,demons,Angels and other un-worldly beings,takes its toll on John,and as a teenager attempting to take his own life,sentences his soul to Hell,when he is brought back to life,he realises,that he can use his gift to send as many demons back to Hell,in the hope of redemption,and to buy his way back to Heaven.
That is the story really,with a side plot of a Mexican migrant finding the so called Spear Of Destiny,which fatally wounded Christ on the Cross,and can bring Hell on Earth,we have John,with a huge battle with the Darkness. With a police detective,investigating her own twin sisters suicide,gets caught up in the ultimate mayhem,with a battle of wills between God,and the Devil,with John Constantine caught between.

With a fantastic cast with Peter Stormare,deliciously scary,and creepily dressed In White as The Devil himself,come to claim John personally,with Tilda Swinton,as an Archangel,with other great performances from Rachel Weisz, Djimomn Hounsou, Pruitt Taylor Vince,as John Constantine's closest friend and also a Priest,who has one of the most disturbing moments in the film later on,we have a film that really is genuinely really watchable,with a great ensemble cast,some great Demon special effects,a great action film with some genuinely scary moments,and some great comic moments too.
Keanu Reeves,as I said does choose his films well, With Johnny Utah, from Point Break, to Neo from the Matrix Trilogy, Officer Jack Traven in Speed, Ted Theodore Logan, in Bill and Ted,and John Wick in John Wick,yes I know he has been in some below average films,then again hasn't all actors in Hollywood,but in 30 plus years of acting,he has certainly been in some great films,creating great characters. Not bad for someone,who most believe cannot act,I disagree I've always had a soft spot for Keanu,even in his stranger choices of films, Like Dracula,Walk in the Clouds, Jonny Mnemonic,Chain Reaction,The Devils Advocate,and A Scanner Darkly. And for all doubters out there who say he can't act I challenge you to watch him in Permanent Record from the eighties,then come back to me with that argument.
4/5⭐️⭐️⭐️⭐️