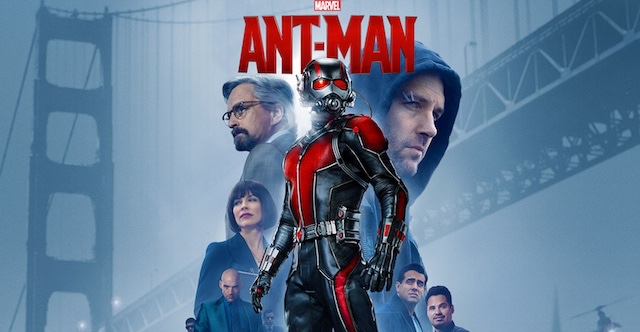 I know some of you may be thinking why am I writing about a Marvel film on my Blog,that primary is a Horror Blog. Well I do review other action type films,and Sci Fi as they are the genres I enjoy the most, but this film I really truly enjoyed. Without doubt the best of the Marvel films put out so far,and yet in box office terms,it is classed as a flop,and may never get another outing,which will be criminal as it is the cleverest,funniest,smartest blockbuster I have seen,that gets the comedy,to action ratio spot on.
With comic actor Paul Rudd,normally part of the recent brat pack of actors,you know Ben Stiller,Vince Vaughn,Owen Wilson,Seth Rogan,Jack Black to name a few. Yet he is the perfect choice as Ant-Man,or Scott Lang,the recently paroled computer hacker,who took down a major corporation,because he didn't like their morals. With the absolute genius of casting,and putting in acting God Michael Douglas,as his protégé and creator of the Ant-Man suit,this film from beginning,to the end is an absolute must watch.

I loved the Fantastic Voyage movie,with the idea of shrinking a human to minuscule size,I loved Dennis Quaid in Inner Space in the eighties,and loved Honey I shrunk the Kids in 1989,so it was without doubt,that I was going to enjoy this film.
I not going to run through the whole Story,but it is very clever that he has to Break into A Shield organisation,and fight against another Avenger Falcon. To the action set pieces,like trying to outrun a simple thing as bath water being run,falling onto a Vinyl Deck,and having to hold onto the grooves in the vinyl is just genius. The fact he can shrink,and become normal size in a blink of an eye,makes fight scenes just plain outstanding.

We have a charismatic bad guy In the form of Corey Stoll,who has been trying to steel Hank Pym's work,or Michael Douglas in the film. With the icing on the cake,the Lovely Evangeline Liily,as Hank Pym's Daughter Hope,who might become Wasp in future episodes,we have honestly a great action film. With the final set piece,being absolutely genius,with Ant-Man batting his Nemesis on a back of a child's Thomas The Tank Engine set,shouldn't work but it just does,it is unbelievable how great it actually looks. With the best screenplay I have seen from fellow Brits Adam Cornish,and Edgar Wright,with Paul Rudd and Adam McKay,we have easily the best Marvel film produced. Shame that the rest of General public couldn't see beyond the Avengers,to give this film ago as it really is a great film.
5/5⭐️⭐️⭐️⭐️⭐️ 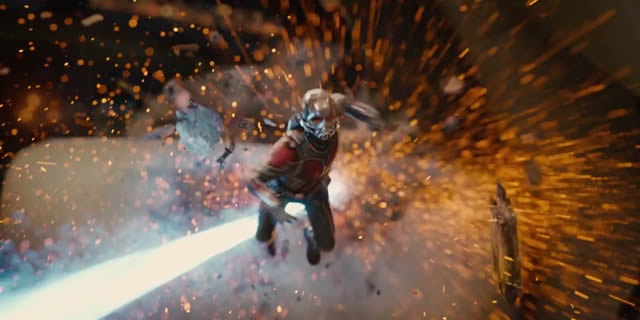