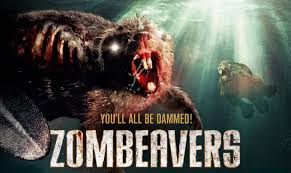 Never had so much fun with the word Beaver,since Leslie Nielson in the Naked Gun,said to Priscilla Presley as she is on a step ladder, "I know I've just had it stuffed"as she removes  a stuffed one from the attic.

I have seen this film on the budget shelves for sometime,only £3.00 at some point,anyway I streamed it for free in the end. I'm glad I did as it isn't bad, made with a nudge,nudge,wink wink, with no one involved with this film taking it seriously. That doesn't mean that it is filmed badly either,with the use of good old fashioned animatronics instead of the cheap nasty option of CGI, at least the actors have something to work with,instead of the usual golf balls on sticks,against a green screen.

I'm not going to give full plot details,as there is no need,we just have two stoner drivers,who hit a Deer in the road,knocking off a canister of toxic waste,that seeps into the water,where the Little Beavers are happy building dams,they turn into an army of the undead,to attack a bunch of good looking students,who are using the cabin for the weekend.

It is plain daft,but with plenty of blood and gore,to go alongside with the laughs,as I said I do not think some scenes are intentional,they just come across that way,because of the absurdities of what is happening on screen,with three very gorgeous ladies with Cortney Palm as Zoe the final Girl,with support from Rachel Melvin as Mary,who has the most gorgeous long legs,to Lexi Atkins as Jenn,who I was surprised she wasn't the final Girl in this film,as Blondes usually always make it to the end.

A very stupid film made firmly with tongue in cheek,like the recent Sharknado's leave your brain at home and just go along for the ride, I really did enjoy this,a daft silly film,perfect for a lazy weekend viewing. Even better get your mates round,with a few beers,and the perfect night in.