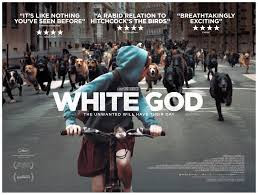 A lot of people might think why is a foreign film about Dogs being mentioned on a horror type blog. Well quite easy if you have Dogs that turn feral,and become organized,and attack and kill Humans who have done them wrong.


White God is a Hungarian film drama,about a young 13 year old girl and the love of her life her dog Hagen,a cross breed Dog. That in Hungary under strict Canine Dog Laws, unless pure breeds,you have to pay a Mungrel Tax. Which is normally not a problem,but with her parents separated she lives with her Mum,but when she goes away on Business,she has to move in with her estranged Dad,who's apartment block does not allow Dogs.


With a busybody neighbors reporting him to the authorities,they have a choice pay a huge fine they cannot afford,or get rid of the Dog. The Dad chooses the latter,and Dumps Hagen in a road,in the middle of the city.
We then have the film told through the eyes of the Dog,who has to join other stray Dogs to stay alive. With Hagen being captured,and forced to take part in illegal Dog Fighting battles,turns Hagen even more Feral.


When at last Hagen escapes,he creates a Dog army of strays, organized,hunt in packs,and attack and kill any human who attempts to harm them. With a determined Hagen intent on hunting down,and killing anyone who harmed him whilst on the streets.
Now this film is no Disney type film,it is gruesome,with constant scenes of Dog abuse,Dog Fighting ,and Dogs acting like a pack of hungry Wolves. Attacking and killing humans, and I thought this was a film about a girl looking for her Dog,and eventually being reunited,well it isn't it really is a dark,and depressing film,about Dog abuse,and cruelty,with Dogs deciding to fight back.

I cannot say I enjoyed this film because I didn't,but I cannot take away how well it was filmed,and the Dogs are the stars of this film,but it is a harrowing watch,with no real happy ending,a sensible one,but not a happy one. With it winning best foreign film, and I cannot disagree with that decision,as it is really a well made,and acted film,but being a Dog,and animal lover myself found the abuse scenes,and Dog fighting scenes,far too depressing,and upsetting to watch.