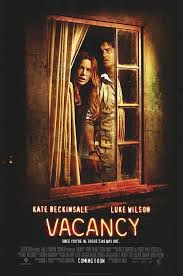 This is what this film is about,a room filled with 24 hour recording cameras,with secret rooms,and passageways,for two sadistic killers to attack,torture,and kill in gruesome ways,all being caught on hidden cameras,those poor souls who have the miss fortune to stay at this Motel.

With a Married couple,who are already at breaking point,and ready to seperate,travelling together,when they have car trouble,and come across this Motel in the Middle of nowhere.
It soon becomes apparent that something is wrong with this room,and the couple find,some of the cameras and one of the Hidden passages. It still doesn't stop them being attacked by the two masked raiders.


Luke Wilson,and Kate Beckinsale as the bickering couple are perfect in this role,although others have commented they are not likeable enough,and almost deserve what should happen to them in this film,which is a little harsh. They are portraying a couple who have drifted apart,but after the Horror of this night,they might actually survive this,and fight for their lives,and the marriage they both want out from.

Directed by  Nimrod Antal,who went on to Direct Predators 2009, and recently the most Interesting concert film ever made and that is Through The Never, with Metallica. This was the first of the home invasion type movies with The Strangers, Funny Games, and and The Purge following,and apart from The Strangers this is a decent film,of survival, and is certainly brutal for a 15 rated film in the UK. With the most disturbing set of special features,involving all the kills that happen in that motel room,in full detail,is truly disturbing. A really good film,that I think has been overlooked over the years. 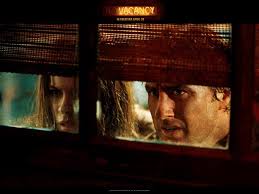