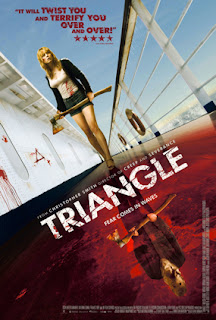 Another great film from fellow Brit Christopher Smith,his third official film,with Creep,and Severance behind his belt, with this I believe to be his best.

A story of a woman called Jess played by Melissa George.A single Mother to a very autistic boy,who agrees to have a day out with friends on a Yacht in the Atlantic Ocean,when the boat is capsized in freak weather conditions,they approach a passing ship, to be saved.

Once they climb on-board the other ship,Jess has a serious case of Deja vu sensing something is not right,she sees,another her on the boat,and a message wrote in blood on a bathroom mirror, to go to the theatre. This is when they are all slaughtered by some cloth face wearing killer.

The thing is when they are all dead,we cut back to the first time we see them,and the whole situation is repeated,hence the title Triangle, this is when Jess is about to figure out what is going on.and why she is seeing multiple versions of herself,on the ship,with her even warning herself,that they all must die to repeat the time loop they are all caught in.

With every loop being equally confusing, Jess finally figures out how to avoid this time loop from happening. With a final third that is equally confusing and brilliantly clever at the same time.  I will not spoil the ending or give any spoilers or plot points,but it is a very clever film,once you figure it out,everything makes complete sense. You may have to Google the film like I did,just to confirm the ending. It is a brilliant piece of film making from Christopher Smith,with Melissa George this being her best performance,and starring a very young actor Liam Hemsworth in his Hollywood debut, we have a fantastic,mind funk of a film,not really a Horror,even though we have people dying,it is more a psychological thriller,but whatever category you put it in, it is an excellent piece of filmmaking. That will be having you thinking about it for days afterwards. 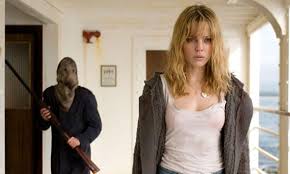