The Taking Of Deborah Logan (2015) Film Review.Directed by AdamRobitel . Distributed by Eagle Films. 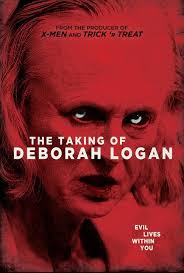 I would like to say I had the pleasure of watching this film,especially as it is not readily available for the UK at the moment. I saw it on US Netflix,and it really is a disturbing film,one that uses,the documentary footage perfectly,like in the film Afflicted.

The story of some medical students,making a documentary on the effects of Alzheimer's,on an older Lady called Deborah Logan,who through her degenerative progress getting worse,and experiencing moments of severe confusion,and violence,especially towards herself,by self harm.

This is no easy film to watch,as you really Take to Deborah,she is such an interesting lady,who throughout the running time we see the degeneration of her condition,and behaviour,that is terrifying to watch. Even confusing trained specialists,and Doctors. As her condition and behavior,is very quickly worsening,with more self harm ,and very unexplainable events happen,including Deborah levitating,and talking in another language,with sound octaves unrecognizable,and multi-layered,as if multiple people are talking from Deborah.

This story in the end is about Demonic Possession,which uses the fact that Deborah is week willed now,and more susceptible to Possession,as explained later in the film. It is a film I have already commented on,using Twitter,and I said I wished I could un-see this movie,as it has scenes,that have unfortunately stuck with me,seeing my  Nan in late stages too of dementia is a terrifying thought,that is it confusion,or something unworldly controlling their actions,and behaviour.

With a completely different take on Possession movies,and a very clever twist later on makes this film so different and unique. It is still a horrible film to watch.
The acting is without doubt the finest I have ever seen with Jill Larson playing Deborah,so convincingly,and very brave too,as this film does have adult nudity in it.
with other top marks going to Anne Ramsey who plays her daughter Sarah,with such balls,and we can see her health deteriorate through the stress and strain,of everything happening. As I said it is a brilliantly acted film,but a very hard watch,and I have no plans to watch it again,as it is so distressing,and it will have you thinking about this movie,long after it has finished. It should though be an Oscar contender,but then again having a Horror element to it will put a stop to that.

A very well made,very distressing,and extremely disturbing film,which will get right into your brain,and will have you thinking about this great movie for days. 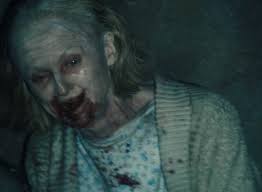