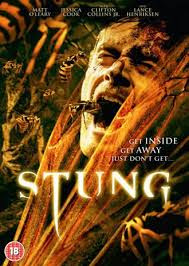 Sometimes in life you have to take the filmmaking process,away from Hollywood,and give it to the finest technicians in the World,and that is the Germans.
Yes this is an American film,with European flair,filmed In Berlin in Germany,with a German crew,director,technicians,with an American Producer,and Full American cast,they even got Lance Henriksen in it.

Filmed entirely onset at a dilapidated old Mansion,they found after The fall of the Berlin Wall, with all the wealth being in the west, left to ruin,the Director,and location scouts,thought it was perfect. Even turning the whole upstairs into production,editing,and writing,suites. And I know all this,well for once instead of just being a bare bones vanilla disk,we have a really detailed making of,with bloopers,interviews,with everyone involved in this great film.

For years I've been thinking we have not had a Bee movie,since the 70's,with Swarm,and Killer Bees,so when  I saw this on the grapevine I got very excited. This time we have Wasps,with this species actually laying eggs,into other insects,to spawn their offspring. This uses the same idea,but when the Son  of the Lady  of the Manor,uses industrial,experimental fertiliser in the Garden,it has strange effects on the local insect population,genetically altering a species of wasp.

The rest of the film takes part at this Garden party,with a bunch of caterers on their make or break job,when a nest is disturbed,a swarm of wasps attack the guests,laying eggs into them,then instantly hatching,with an Alien style of exploding out of the host,to create human sized wasps. Who are ready to procreate and lay more eggs,making more Wasps. We then have a bloodbath,and survival type movie with only the two caterers,and the Local Mayor surviving the Wasp attack. They have to fight for their lives,against these mutant insects.

With using good old fashioned animatronic creatures,controlled by animatronic experts,we have a film,without the stupid use of CGI,we actually have proper mutant creatures to see on screen,and they look absolutely terrifying,with blood loads of gore,and gallons of blood gushing,we have a real violent horror film,that is actually really funny in places,yes this was made not to be taken seriously but to have a genuine laugh,with some great moments of tension thrown in also. In reminded me of Mimic, crossed with Alien,with some really great acting especially from the two young leads,who are entirely likeable throughout,and you really want to route for them,lance Henriksen as the local Mayor,whom is a blazing alcoholic,with great lines,and great comic timing.

Starring Matt O'Leary as Paul,and the love of his life,and catering partner, Julia, played by the absolutely gorgeous Jessica Cook. With a Budget of just $ 2,5000,000 the effects and everything on screen looks brilliant,Bennie Diez is certainly a Director to look out for in the future. A really good,blood filled splatter fest that is funny also,with great effects,using old fashioned methods. I was really impressed by this film.
3/5⭐️⭐️⭐️ 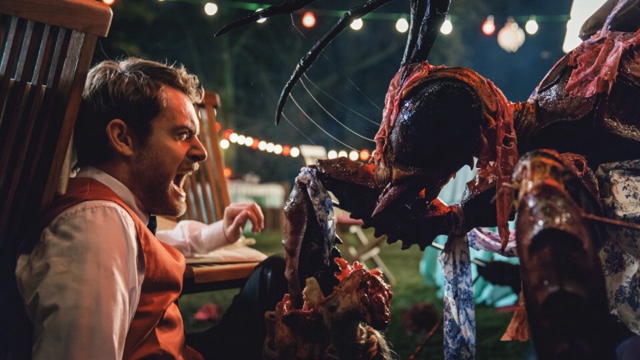