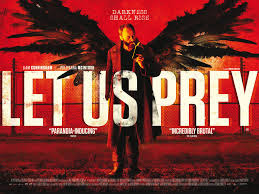 A great little indie chiller,from Scotland with Liam Cunningham as a strange drifter who just appears one night. It just so happens to be Pc Rachael Heggie's first night as a constable,in a small remote rural Police Station,with Sgt Macready as her gruff and not very welcoming boss.

Thing is none of the constables make Rachael welcome,and almost makes my assumption that most Coppers are ignorant,full of themselves ego maniacs. The thing is Rachael arrests a local trouble making youth for dangerous driving. The strange thing is by chance other people are arrested at around the same time,including the drifter,who's record say he has been dead since the 1970's.

Is it some coincidence that he is there,the same as 3 others.Who each have dark secrets,the Wife Beating Teacher, the Doctor,who may have just gone a little crazy,and killed his family,and the youngster who might have been involved in another hit and run,leaving a young lady dying in a ditch somewhere. The thing is the drifter has a way of corrupting the  prisoners,who all confess to their sins. In all fairness I was not expecting much from this,but was actually pleasantly surprised,also it was very violent,in places,with violence coming from nowhere.
A quite disturbing little tail,of bad people,some how congregating in the same place at the same time. With one man almost pulling their strings,like puppets. With an outcome, that in fairness you could guess a while off. It is still an enjoyable little Horror,about the Devil finally coming to earth to claim the souls of very bad people with PC Rachael caught up in the mayhem. Although this is not particularly that original,the acting is surprisingly good,especially from Liam Cunningham as the Drifter and Pollyanna Macintosh as Rookie PC Rachael Heggie.

The absolute genius of this film,is the opening credits,that puts most modern films with huge budgets to shame,that is so intriguing,you cannot wait to see what happens next,without cleverly giving nothing away. A fabulous way of grabbing your attention straight away,that sets the scene for a very disturbing violent film,that is maybe not shocking,but still a fantastic horror thriller. With parts of the film reminding me of Event Horizon,but obviously not in space. A fantastic British horror.
3/5🌟🌟🌟 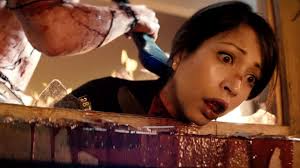