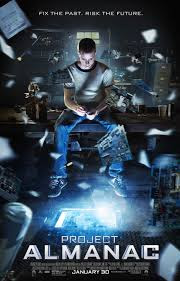 A time travelling film for the One Direction generation,which in fairness is not all bad.
When David and his sister Christina,come across an old VCR Video camera in the loft of their home,surprised it still works.

They reminisce over their youth,and watch David at his eighth Birthday party,with his Dad,who actually dies on the same day in a car accident coming home from work. When David catches a glimpse of himself in the background of the video. He shows his friends,who are dubious about the whole thing.


David comes across some of his Dad's former work,with some strange Blueprints,and some strange device,with mathematical equations,and he realises his Dads government job,might have been working on some Time Travelling machine.


Of cause David, his teenage friends are typical computer genius's,which In all fairness is probably the truth,with a recent 15 year old kid being arrested for taking down,and stealing  bank details of a famous mobile phone company in the UK . Anyway with modern technology,he manages to actually get this thing working,and use the device for all the wrong reasons,to win money,go to a music festival,using backstage passes brought off eBay months after the event,to get into the concert for free.


With time travelling movies,you cause ripples in time,if you change the past,and the friends all realise that messing with time,this happens,when the school looses a major sporting event,due to the star player breaking his leg,which leads to his Dad to drink drive,who knocks down some pilot who should've been flying a plane which crashes and kills many people. They have to go back and solve these ripples. But the more they mess with time,more time paradox's occur,with David having to make the decision to go back to the time to tell his dad to destroy the time machine blueprint.


Now I thought I would hate this,as I thought the kids would be annoying,but they are not,and you do care for them,with another clever time travelling film,for once showing the actions of messing with the time space continuum,with really good performances from some of the young leads. And a scratch your head ending,makes this not a bad sci fi film. Yes I have seen better,but for a film I thought I would hate,you really do care for these teenagers in the end,and the choices they have to make.
3/5⭐️⭐️⭐️ 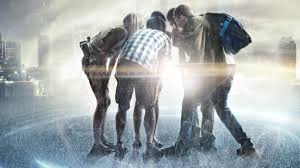