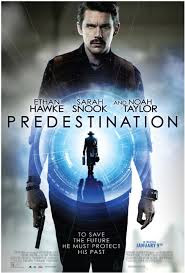 A man walks into a bar,sounds like a joke well it is the start of this fantastic film.
It is going to be very hard to review this film without giving any plot points away.

It is without doubt one of the best time travelling movies I have ever seen. I thought Looper was good,well this blows that film out the water,throws it around in a Tornado,shoots it hundreds of feet in the air,and explodes into fragments of this film.


It is without doubt Ethan Hawkes best role, since Alive,Dead Poets Society,and Training Day, a Time Travelling Cop,on the trail of the Fizzle Bomber,who will eventually create one of America's worst terrorist explosions,causing tens of thousands of people to die in New York in 1975.


He is a determined man,who in the opening scenes,almost catches the bomber,to have the explosive device explode,and burn his face badly. We then catch him 7 years later,after a full face transplant,which is now available,and he looks like Ethan Hawke, or John Doe in this film.

He Is in then sent on a mission to meet this Man,who walks into a Bar one night in 1974,acting as a bartender John listens to this mans story,with this being the most integral part of this film,and that is all I'm saying about this fantastic film. As it really has the most intelligent script on Time Travel,and time Paradox,and Predestination,and after all the messing about with time,we  always come back to a predestined time of coincidences,that still determine our fate in life.

With Daybreakers behind them,this is easily Michael and Peter  Spierig 's greatest film,and it being the second feature they have Directed, With it being their Dark Side Of The Moon, album, how the hell  are they going to better this movie. With another standout performance from Sarah Snook as Jane,and Noah Taylor.
Australian cinema this year have produced easily some of the best films I have seen,with Wyrmwood,The Babadook, Wolf Creak 2,beating Hollywood hands down in the filmmaking process. A positively clever,well made film,that will blow you away with its cleverness,originality,and finest ideas on Time Travel.
4/5⭐️⭐️⭐️⭐️