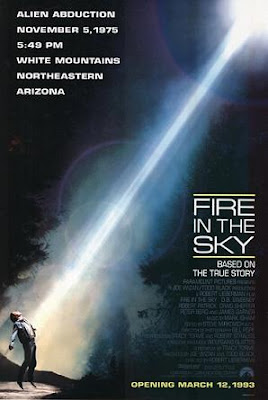 I can always remember this film vividly,as I took a girl out on a first date at the cinema to watch it. It was 1993,we didn't have a second date,as the film freaked her out,and wanted to leave and I refused as I was loving the film too much.

It is based on a true account of a man being abducted in The White Mountains Northeast Arizona,and based on the book of the same name by Travis Walton. Some lumberjacks head to the mountains to work one night,when a strange object in the sky catches there eye, Travis gets out the pickup truck to have a look,and is struck by this blinding white light,and is thrown into the air,at such velocity,his friends believing him to be dead,panic and leave the area. To find no body later.
Of cause the local sheriff suspects fowl play and tries to pin the murder of Travis on his future brother in law,Mike Walters,and the rest of the crew,as tensions had been reported amongst the group involving Travis. With his friends being charged with murder,a phone call 5 days later reveals Travis is very much alive,dehydrated,disoriented,scared,naked,unsure where he has been.
We then have Travis trying to integrate back into society,but he is a changed man,with visions slowly returning to him,about abduction,which no one seems to take him seriously,with all medical tests proving he is completely fine. With visions returning we finally as an audience see in the final third of the film what Travis went through.and it is truly sickening,I'm not going to spoil the ending,but the whole drama leading up to this event,makes the film truly worth it.
With the most depraved use of torture to Travis,from these Alien Beings,is sickening,and I can see why my date wanted to leave the cinema,as I found the whole experience so unnerving,just in 20 minutes the ending makes this a very average film into a "oh my god what have I just watched"type of film. I'm being honest I watched this film twice at the cinema,but never owning it on home video,as the final scenes, did leave a very strange impression on me.
With great performances from D.B Sweeny as Travis, Robert Patrick in his second staring role,after Terminator 2,proving he is a good actor,with other young leads,with Craig Sheffer from Nightbreed,and a very young Peter Berg,before he turned to directing,with the best casting of James Garner as Lt Frank Walters. A fantastic piece of sci fi horror,with some great drama thrown in too,with fantastic performances from all involved. A really good film,that will make anyone squirm In their seats as they watch the torture of poor Travis from theses soulless Alien Beings. 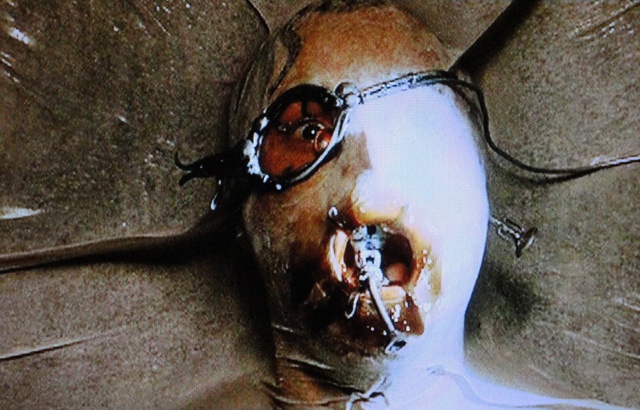