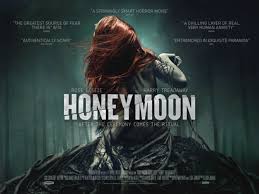 This is really an interesting film,an American film with really only two actors in the whole movie,but keeping you enthralled throughout. The fact the two leads Are actually British actors,in which I didn't know till I had researched the film afterwards. Starring the very lovely,and incredibly pretty Rose Leslie, a Sctotish Actress,who is known in Game Of Thrones,and Harry Treadaway who is known from his character work on the TV series Penny Dreadful.

A story of a blissfully happy,recently Married couple. Still very much in love,with happy hormones and endorphins of love flying every direction. Being absolutely besotted with each other,with Sex Morning,Afternoons, and nights regularly for the first part of their blissful Honeymoon. At first I actually thought no one can actually be that in love and completely happy,but this is the most integral part of the story,and what makes this film even more terrifying.

When Honeymooning in her Childhood vacation cabin,somewhere in Canada, Bea awakens one night startled, and stunned,awake in the woods, with her Husband just convinced she had slept walked. This is where Bea's behaviour becomes worrying,just little behaviour traits to begin with,like forgetting how to make Coffee,but she is making excuses for her Husband not to touch her intimately,avoiding any sexual advances. And getting words mixed up like " I put my clothes in the clothes box" instead of a suitcase. And " I'm taking a sleep" instead of saying I'm having a rest.

Bea's behaviour becomes so unlike her, Paul becomes to think that this is is not the same woman he married. We have a film about  the changes in a relationship,and do we really know that other person that well. We also have a film that is a supernatural film,about a Woman's consciousness,being taken away from her,and being replaced with a lifeless drone,with nothing of the original person left.

We do have this element of the film thrust upon us quite early on in the film,and would have been better to have Bea's health and mind deteriorate slower,with the changes not being so obvious,so soon. But the director handles the pace of the film perfectly,and we do have scenes of genuine tension,and scenes to confuse the viewer, into an uneasiness of confusion,and not quite knowing exactly what is going on.
A very intelligent psychological thriller,not a Horror,or even a Sci Fi film,but a film about do we really know each other that well,and could we spot small differences in our loved ones personality's . 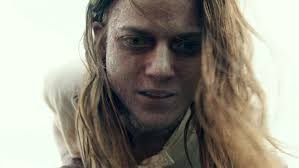