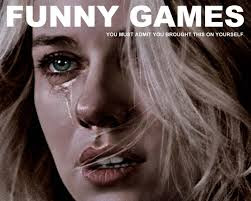 A film that I won't be watching twice,probably one of the most depraved films I have ever seen,and the truth is,in most films we have to have survivors. Well this film proves like in real life,if this home invasion really happened,there would be no survivors.


A shot for shot remake, directed by the same Austrian Michael Heneke, made 10 years previous. This time not German,but English,for the the rest of us,to not enjoy.


Staring Tim Roth,and Naomi Watts, with the two psychopathic protagonists,admittedly played well by Michael Pitt,and Bradley Corbett. Who invade the family, holiday home in New England. Dressed in what can only be described as Tennis Whites,and proceed to play a psychotic sick game,of psychology,to scare the family,with a bet between Peter and Paul,that the family will not survive the night,and will be dead by 900 am the next day.

As I said I did not like this film,because for one reason,it is too dam realistic,with even the most positive of people,would watch this and think,no one is coming out alive in this film. Naomi and Tim play believable parents,trying their best to save their son,and try to plead for their lives, with easily the best performances being played by, Michael Pitt,and Bradley Corbett respectively,as Peter,and Paul.

A truly horrible film to watch,far to realistic for me,and yes I love Horror,and can disassociated myself from most films,with this one,the same as The Strangers, truly got to me,and I will not be going back for a second viewing, on either.
4/5⭐️⭐️⭐️⭐️ 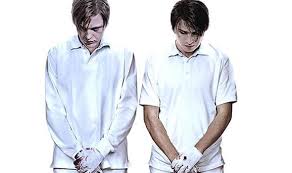