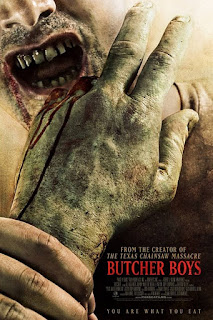 What do you get if you cross Judgement Night, with Hostel you get this film set in Texas. Called Butcher Boys,or also known as Boneboys. A very strange film I think about cannibalism being the Drug of choice,and also business for a small number of gentleman. With young Females mainly on the Menu,especially Virginal teenage girls.

Four Teenage kids on a night out celebrating a17Th Birthday,Brother and sister Mikey,and Sissy,and boyfriend and girlfriend Kenny,whose birthday it is and his feisty girlfriend Barbie,who actually is the cause of all the mayhem that happens,through her stupidity and actions.

Anyway the four kids end up in a wrong part of town,and unfortunately run into this gang of lads,who decide they need a lesson taught,especially to the boys,and maybe the Girls will be on someone's menu.
we have in sorts firstly a chase,and survive movie,which turns into sickening and barbaric scenes,of Cannibalism,and torture movie of young girls,being prepped for quite simply a meat market.

It is not a nice film,in fact it is a  truly horrible watch,which myself the viewer not quite sure,what the movie really wants to be, a torture movie,a cannibal movie,a chase movie,as it tries all three,and fails on all three.
with below par acting,and terrible script makes this film almost unwatchable. We only keep watching,in theory to just find out what the Hell  is going on,and how the bloody Hell  are they going to end this film. Which in all fairness they fail to do also.

A strange film made purely to offend,and maybe to please the gorehounds out there. Which I can get if a good story is involved,but even contacting the director on Twitter,I'm still not sure what this film wants to be. He said it is a movie about addiction,and the addiction of choice is not drugs,or Alcohol but Human Flesh and blood,especially off Teenage virgin girls.
The plus points it shows a horrible side of backstreet America,and the power these gangs have in inner city areas.where even Cops fear to tread. It shows some decent gore moments,and a great performance from Ali Faulkner as Sissy,but that is all I can say about this film. Not the best I'm afraid,if you want a sick movie set in Texas,watch a Texas Chainsaw Massacre instead,or Hostel,if you enjoy torture porn ,not this disappointment of a film.