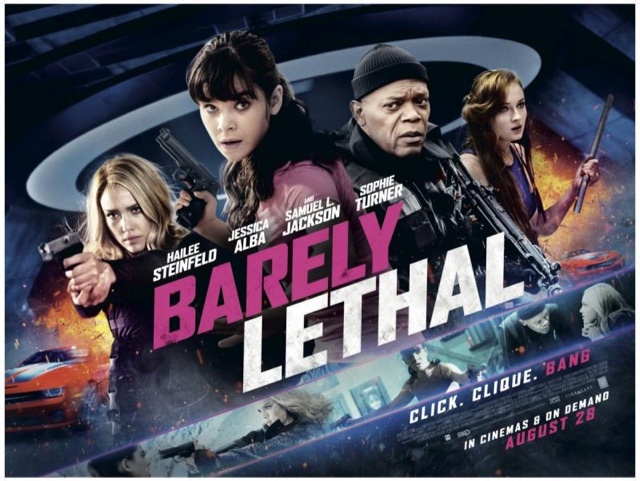 Just by looking at this poster above you would be forgiven into to thinking this was a decent action type flick. Unfortunately with a clever Trailer, clever poster campaign's this gave the impression that this  film is a comedy action film,well it is neither. With Samuel L Jackson,just collecting his Pension Money now, Jessica Alba,as a Dangerous Terrorist,the only thing scary thing about her is the fact she is still acting.
With Sophie Turner from Game Of Thrones,as a titular nemesis, I wish I could say the only thing that saves this mess is Hailee Stenifeld,well she doesn't,and I really like her as an actress,this is why I brought this movie,she is mesmerising in True Gritt,really good in Endersgame,even in the recent 3 Days To Kill,with Kevin Costner,apart from him,was the best thing in that movie.
With this being her. Major staring role,I just wished she would have choose more carefully,as she is so much better than this.
The problem is,it cannot decide what it wants to be,a comedy,an action comedy, a teen drama,I'm not sure if it was trying to parody all the other Teen films made before, like Clueless, Mean Girls,or if it was a genuine tribute to these type of films,because it ended up,like every other forgettable teen dramas,a complete waste of time.
Plus points the two action fight scenes are well choreographed,with Hailee and Sophie kicking ten bells out of each other, more Gun play would have worked,as in the teen comedy 21,and 22 Jump Street,with the violence,comedy levels just right.
Hailee is still a great actress,and is stunningly Gorgeous for her youth,and very tall,as I said this could have been a half decent action movie,but was quite happy to be just an average movie,about teen angst,that we have seen done better in other movies.
A true disappointment of a movie,that could have been a great female action comedy,which became either as it has no action,and no comedy scenes to mention,just Teen cliches we have seen better in other movies.
1⭐️