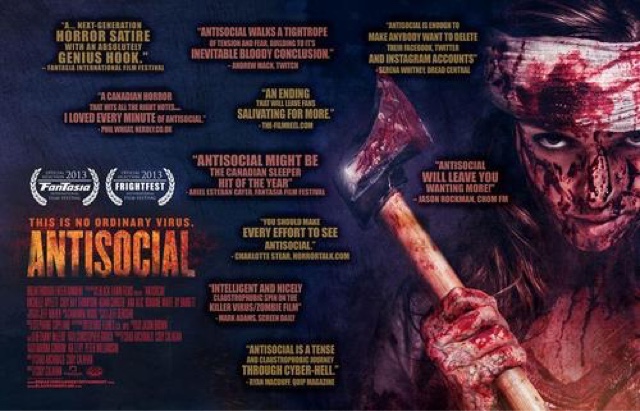 Never heard anything about this film,but now I've discovered US Netflix,I suddenly have access to hundreds of films. I watched this last night,and yes it kinda has been done before,in different formats eg, some type of virus,turning the population into violent aggressive people,intent on doing harm to others. Think of it as a mix between 28 Days later, mixed with The Crazies and a little Videodrone thrown in and you get this film.
In this modern age we are all addicted to social media in some format,well this film plays on that,with a new hip social media app,that somehow manages to almost force people to post more stuff,almost an addiction. With a new algorithm built in to subconsciously incourage our brains to become addicted to this app. With a new type of artificial intelligence built in,becomes self aware,which the software developers,tries to disable,sending a new update,a computer virus which actually infects the human brain also.

Sounds daft but it actually works,David Cronenberg touched on this type of mind control by technology in Videodrone in the eighties,well this is a modern day version,using modern technology,such as smart phones,tablets and laptops,to implant a modern virus in the shape of an electrical parasite which takes over the brain.
I  really enjoyed this,and really disappointed by the negative reviews,it even had a zero score on rotten tomatoes, as I said it is incredibly violent,very claustrophobic,being set in one apartment,during a New Years Eve celebration,with the Whole World going to Hell,and the cause the modern human need to share everything on social media platforms. As I said previously it is a Canadian film,with the film maker Cody Calahan reminding me of a David Cronenberg,style of filmmaking. Yes it is not perfect,but a decent, violent flick,with not the best acting,but all that can be forgiven,as it really is a half decent Horror film,with the ending very much reminding me of Resident Evil. Yes I can recommend this little indie flick,with a sequel being planned for this year, I cannot wait,to see how the story develops.
3/5***