This could have actually been a half decent film,if it was maybe part of a section of an anthology type film like the VHS franchise. Instead of being a standalone film,just copying the before mentioned film,but doing it badly.
Art the clown is a decent creation and is easily the best thing in this trilogy of stories,in which he links into.

Told via a Video cassette again,given to a kid on Halloween,after trick or treating,when the cassette is played it brings Art the clown into the real world, kind of like a Ring wannabe,with a clown stepping out of the screen instead of a dark haired sinister girl.

The thing is about this film it had decent ideas,but could not last a full eighty minute running time. With it being included into some short story,or Anthology type film it could have worked. I could even forgive some of the bad acting,poor effects in this,as it really has some good ideas in it.
It is incredibly violent,with lots of gore,and blood splattered across the screen, Art the Clown is a fantastic creation,and the ending was surprisingly good,if not a little sick.
There was in the end though something missing from this film and it was overlong,but being a short story,this film would have been a decent little,sick,twisted chiller.
2/5⭐️⭐️ 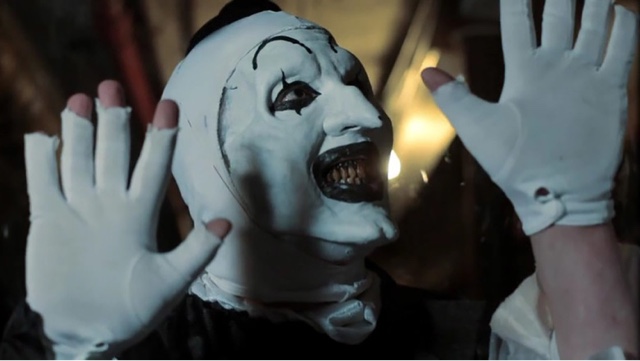