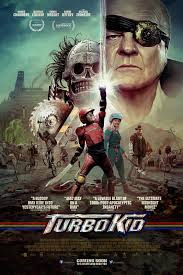 If you are a child of the eighties,you will totally get this film,imagine all the apocalyptic films made in this decade, Hell Comes To Frogtown,Cherry 2000, The Adventures of Bukaroo Banzai,mixed with BMX Bandits,then you will get this film.

Deliberately filmed to look like an eighties film. Including the fabulous menus you get when you put the disk in,which is made to look like a VCR interface. I'm being completely honest I absolutely bloody loved this film. I love films,but not many really let me in, I can count on my one hand the films that have made me say "WOW" the last film was Kick Ass in 2010.

So you can see I watch hundreds of films a year,and to see two WOW films in 5 years,is pretty decent for me. The film is perfection,and it is a film that really shouldn't work,but it does so well. To the over the top gore,and blood,bodies exploding,heads being decapitated by flying saw blades, Michael Ironside completely camping it up as the bad guy. And the best performance from Lawrence LeBeouf as Apple,the absolutely mesmerising,Girl who Turbo Kid falls for,and no wonder why,she is so sweet,with a childlike innocence,with such trust,and naivety,with no idea how violent,and dangerous this vicious world is.

It comes to something that a film costing probably the same equivalent as one action scene in Mad Max Fury Road, is so much better, yes I know everybody has opinions,but mine is you must see this film,an absolutely modern cult classic,that absolutely pisses on Mad Max,comes back around and blows the shit out of that crap reboot.
4/5⭐️⭐️⭐️⭐️ 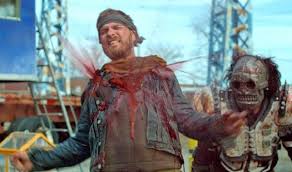