Without doubt the best and only Werewolf movie,that no matter how many times you watch ,gets better with every viewing. An American Werewolf In London- Film Review 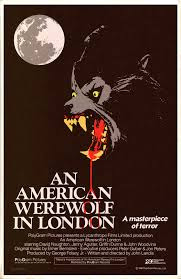 I cannot say any more about this John Landis classic. Previously a comedy director,with the brilliantly funny Animal House under his wing. He decided to make this film,a so called horror comedy,that has its genius humorous moments. And some of the most frightening scenes also,with the Nazi Werewolf scenes,that is extremely disturbing,and the various dream sequences that as a teenager scared the living daylights out of me. With two scenes in particular that every person can relate too,or remember that is the famous sex scene with the Gorgeous and very British Jenny Agutta,who actually we see her naked as well. The other fabulous scene is the transformation scene with David turning into the Werewolf,with the best prosthetic make-up from Rick Baker,winning numerous awards. Everything about this film is a classic,from the opening scenes in The Slaughtered Lamb,with a brilliant Brian Glover telling them to keep to the roads,and not go on to  the moors,with a blink and miss it appearance from Rick Mayal. With very British humour throughout even though it is an American produced film. And the standout role of Griffin Dunne as Jack who is eaten and killed in the opening minutes,but comes back to haunt David,as a decomposing undead spirit, as his soul can not rest until all bloodlines of the Werewolf is destroyed,so he continues to live in purgatory,the same with all the other victims of the Werewolf attacks,and haunting David throughout different parts of the film. As I said earlier a classic in every sense of the word,with numerous viewings it never looses it's edge,and gets better with every viewing 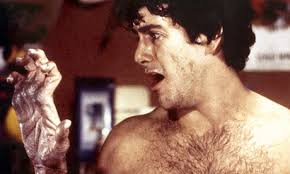