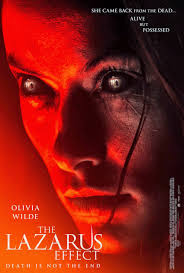 Sometimes dead is better,and that was apparent in the Movie Pet Cemetery,when the dead should never be resurrected,the same with this movie,with scientists deciding to play God.
If you die,it is  meant to be.

When on a Government granted project supposed to be researching ,on stroke,and comatose patients,to revive the Brain function.they are actually using the same practice to wake a deceased brain. The first with a gorgeous dog named Rocky. Then eventually on a human being,with Olivia Wilde being the first human test subject,as an accident in the lab, leaving her electrocuted and very much dead,her partner,and Colleague trys the same serum on her nicknamed the Lazarus serum to resurrect her.

The problem is the serum creates extreme,and other functions to the brain,unlocking the potential to use more of your brain capacity, humanly possible. Also bringing back a part of the afterlife with her,including maybe visions of Hell,and the evil she has returned with, due to a mistake as a child,leading to many deaths,she has been doomed all her life to return there. Olivia Wilde is strangely attractive,even when dead,and resurrected in this,but cannot stop this from being a film just like any other. With it strangely reminding me of Pet Cemetery,Flatliners,and even Hollow Man,with the laboratory setting.

It is not terrible either,not deserving the such negative reviews on Rotten Tomatoes,and IMDb,as it has some creepy moments,enough to keep you occupied for 80 minutes,although not groundbreaking in anyway,and has been done before,it is still worth a watch. Mark Duplass is good in this,but if you really want to see a performance from him watch Creep (2014) he is absolutely brilliant in that movie.
All of in all this movie is just average,the trailer makes the film more interesting than it really is,although not as terrible as it is made out to be,it still could have been more promising.
2/5⭐️⭐️ 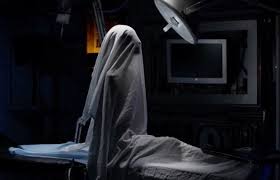