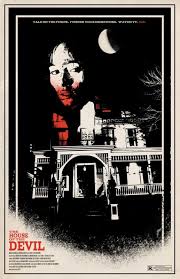 I'm so ashamed that I have not seen this movie till today, I had heard of it, heard of the Director Ti West,but due to negative reviews never really gave it a watch or even chance. I was even given it as a recommendation after my review of It Follows,because both had an eighties feel to it. My god I'm so angry with myself as this film is fucking brilliant,sorry to swear but it really is. A film that throughout the entire running time, I felt completely uneasy watching it. Yes it is a deliberately slow film,with a climax that is worth the pay off. With a deliberate 80's feel to it,even to the deliberate grain,that many films were filmed in, due to cheap film stock. To the movie titles even looking like they were from any film made early to mid eighties. As I said I felt completely uneasy watching this film,even without the use of jump scares,knowing that something horrible is going to happen.
My heart was literally racing at the end of the film. As I said the film is not jump out of seat scary,but has the most uneasy,horrible feel about the film throughout. It is really hard to put into words how this film made me feel,and it certainly wasn't happy. Why oh why this film was lambasted by a few critics,and have negative reviews on IMDb,I suspose as my Dad once said everyone has an opinion,they are like assholes everybody has one,does it mean they are right,no it does not,does it make me right? Probably not!!! But I can recommend this film without doubt,and the acting is top class,that others must have been watching a different film,as the performances from Jocelin Donahue,and the very creepy Tom Noonan are absolutely top notch. A fantastic,yet horrible film,to freak you out for hours after watching. I loved it.
4/5⭐️⭐️⭐️⭐️ 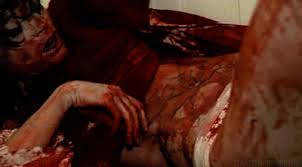