Just why do these Guys keep killing themselves. 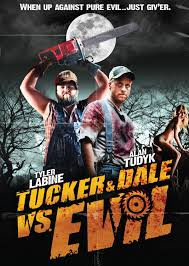 Why do Hillbillies always get a bad reputation in films,just because of Wrong Turn, Southern Comfort, Deliverance,they are portrayed as blood thirsty,inbred killers,who want to make you squeal like a pig. Tucker and Dale are two young guys,best buddies,who are happy to live in the backwoods,happily living off the land,living the simple life. When there peace is ruined by a bunch of spring breakers,with Hillbilly racist views. When a simple misunderstanding of a Woman being rescued by Tucker and Dale,from a  river,her friends see's these two guys dragging her body from the river into their boat,and assume they have killed her. So they launch a plan to kill these two innocent guys. The problem is these kids are crap at killing,or even the execution of killing,and end up killing themselves,trying to attack Tucker and Dale. That is the genius of this movie,and the fact the two guys plays the roles of such naivety,and have absolutely no idea what is going on,and why  these kids keep on attacking them,and keep dying in front of them. It is comedy of the darkest nature. With two great performances from Alan Tudyk, from Serenity fame, and  Tyler Labine from Reaper Tv fame with Katrina Bowden as Alison the girl they rescue,and nurse back to health,is stunningly gorgeous,and so much better in this than Nurse 3D in which she starred also, maybe comedy is her thing. A cracking film that I think anybody who has seen it  love it.