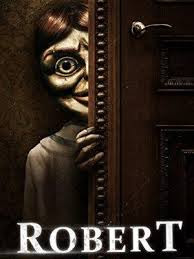 I have just finished watching this movie and needed to put down in words,straight away the feelings I have towards it. And the words are,well it is a little crap,if only the Movie was as scary as the DVD cover itself,or even the doll Robert could have been a very good movie. In the end the director Andrew Jones was happy to settle for average. I'm not saying all is bad,as the movie does have its creepy moments,but the whole thing is ruined by really bad acting,plotting and an unbelievable chemistry between a Man and Wife.Suzie Frances and Garton Lee Bane,are not the most believable actors I have seen.and have actually worked together before,in another Andrew Jones film, which I should have researched better,but I really couldn't be bothered.
Now I'm a lover of independent cinema,I like to give all films a decent chance,and this film could have been a shining light of British independent film making,with better,believable actors this film could have been fantastic,as the director uses the Doll very well,we never see it move,but we know he has,there is a genuine sense of dread in some scenes. And the Doll is used perfectly,it is just the script could have been better,the film maybe shorter by 10 minutes off the running time,this then could have been a decent film,the fact it is based on a true story,and the haunted doll rests in a sealed glass unit in America somewhere. As I said earlier the film showed real promise from the start,then it changed,with an unbelievable family unit,which ruined the whole film. Shame as I was really looking forward to watching this,to have my expectations a little ruined.
2/5⭐️⭐️