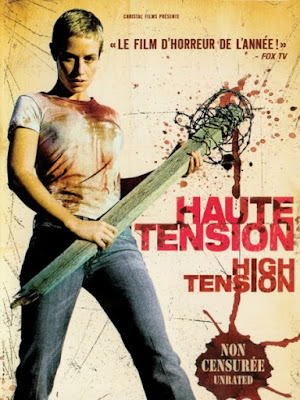 What can be said about this fantastic debut from French Director Alexandre Aja. A simple story about two best friends Alex and Marie,going on holiday together,to stop with Alex's parents. Everything is well until a knock at the door late one night. Which Marie wakes to open the Door, to only be confronted by this huge man.

The Dad hears the knock too,and is rewarded by being beaten,head put in the slats on the staircase,and a Grand Piano pushed into his head to decapitate him from this killer.Yes this film is violent,and enough red crimson to go round. Critics were never kind to this movie,as it was regarded as being too sick and twisted,far too violent. With many scenes being forced to be cut by the Censors in all Countries. Yet it is a very good slasher movie.

Will Alex and Marie make it out alive,from the serial killer in the house?.
Will anyone survive the night?
One final question is why does Alex seem afraid of her friend,when all she is doing is trying to protect her from this killer. It is a brilliant film,incredibly violent,but so over the the top,it is almost forgivable. With some ingienius kills,and fantastic performances from Cecil De France as Marie,Maiwenn, as Alex, and Phillipe Nahon as the women hating serial killer. It is a great debut film from Alexandre Aja,who went on to Direct the Hills Have Eyes Reboot in 2006,which was equally sick and twisted. But this film will always be remembered for the strong female leads,the brilliant acting,the sick violence,and probably the best twisted ending ever. A must watch film, yes it is subtitled, and Named High Tension, and even Switchblade Romance in some countries,but whatever name it is called it is a brilliant piece of overy the top violence,and terror.
4/5⭐️⭐️⭐️⭐️