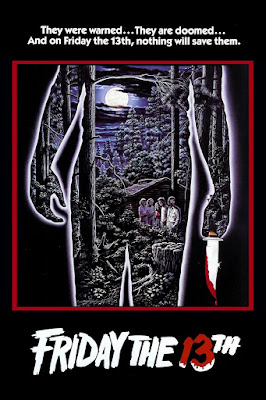 The film that started it all,the story of Crystal Lake,the summer camp for boys and girls,and the misfortune  of one young boy in particular. Who drowned in the lake,as camp councillors were frolicking,flirting, not paying attention,when little Jason Vorhees got into difficulties, and died in that lake. Some time later some camp councillors died,even murdered by some unknown entity,and the old campfire rumours and stories started that it is the ghost of Jason killing Councillors for letting him drown.

Yet it is now modern times,well 1980 exactly and Crystal Lake camp is reopening again for the summer vacation. With warnings from crazy Ben the local nut,warning all to stay away,but kids being kids do they listen. As the camp councillors arrive for work,full of jovial excitement,somebody believes the camp councillors need to pay,with their lives. And we have a hour or so of slashing and slicing,even Kevin Bacon being impaled on a bed,what else could you want from a film. Well the film is still the best of the series,and has the best twist near the end,with Jason Vorhees actually not the killer,you have to wait for further sequels to see the Hockey wearing giant of a Man Jason Return. I liked this film I liked the twist at the end. I do think with multiple sequels the whole Jason thing just got tiresome but that is just my opinion. The first is still the best I'm afraid,and a classic piece of 80's Horror truly creating the slasher genre of that decade, with The Burning, Sleepaway Camp, My Bloody Valentine, Happy Birthday To Me, April Fools Day, The Mutilator to name but a few, soon followed, but this is still the best.
4/5⭐️⭐️⭐️⭐️ 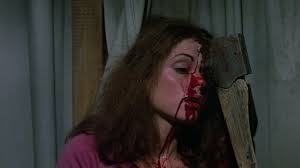