Beware The Army Of The 12 Monkeys 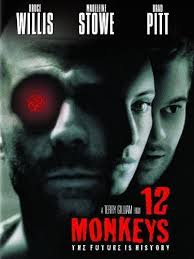 A very quick question what do you get if you add Bruce Willis,Brad Pitt and an ex Monty Python Terry Gilliam. You get the mind F##k film that is 12 Monkeys,a post apocalyptic film,after a man made virus takes out 90% of the Human Race,in a terrorist attack,blamed on the radical  group The Army Of The 12 Monkeys. Very much like a very intelligent Terminator film,the future survivors find the possible culprit,and leader of the 12 Monkeys,send back Bruce Willis from the future to locate him in the past and kill him. The problem is when a delirious Willis in the past,starts spouting nonsense about the future he is sectioned,and put in a Mental Hospital,where he meets the equally bonkers Brad Pitt. To be honest I have seen this film many times,it still takes a lot of concentration,to follow the complicated plot. It is still a very intelligent film about time travel,and coincidences with your past self meeting your future self. That predetermined who you are in the future.can they stop the Army Of The 12 Monkeys,if it is even them at all,as I said before it isn't an easy watch,not because of violence,just because it is very clever,but also odd at the same time. Which will put off the average cinema goer,but I loved it from the first view,with an on form Willis,and Pitt,with the equally gorgeous Madeline Stowe as the woman who helps Willis,as I said one of the smartest sci-fi thrillers of the nineties,that has been completely ruined by a terrible TV series. So please watch the original and the best, this film,and only hope because it was so original it never gets remade,and ruined again. 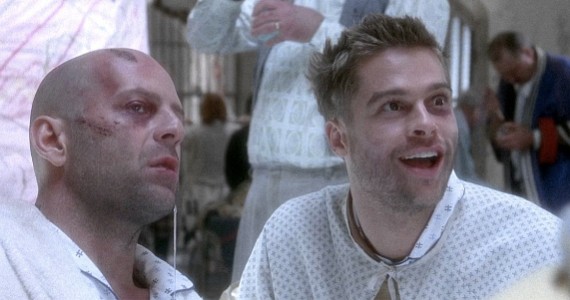